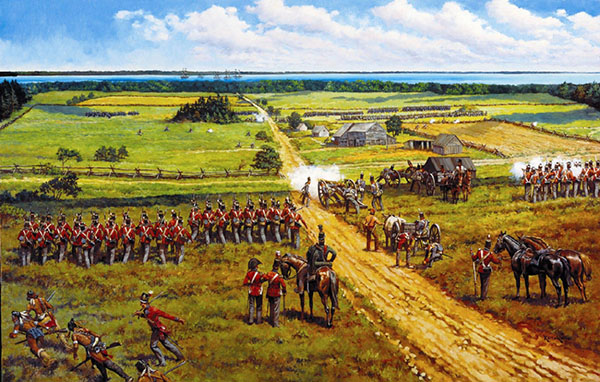 When war was declared, Sir Isaac Brock ordered the capture of Mackinac Island. After losing tactical advantage, the fort was surrendered without bloodshed.

The British constructed Fort Michilimackinac (later renamed Fort Mackinac) on Mackinac Island between 1779 and 1781. The fort, located 300 miles north of Fort Detroit, guarded the channel between Lake Huron and Lake Michigan. After the Revolutionary War ended in 1782, the British ceded Mackinac Island to the United States and later built another fortification on nearby St. Joseph Island.

Meanwhile, there were approximately 60 American troops stationed at Fort Michilimackinac, commanded by Lieutenant Porter Hanks. Although the war was almost one month old, the remote fort had not been informed!

The Americans became suspicious when natives in war canoes were seen traveling north towards St. Joseph Island. On July 16, Lieutenant Hanks ordered a militia officer, Captain Michael Dousman, to travel north and observe activities at the British fort. Unfortunately, after leaving Mackinac Island, Captain Dousman was almost immediately captured by the British force on its way to attack the American fort.

The British soldiers and their allies sailed to Mackinac Island aboard the armed schooner Caledonia, seventy war canoes, and ten bateaux. They landed under cover of darkness on the north side of the island. While his artillerists dragged two 6-pounder cannon to the heights above the American fort, Captain Roberts, with the help of Captain Dousman who had been paroled, evacuated civilians from the small village and sheltered them inside an abandoned distillery on the west side of the island.

Doctor Sylvester Day, the fort surgeon who lived in the village, secretly traveled to the fort and reported on the British landing. He also delivered news that the British were warning that if a single shot was fired in defense of the fort, the native tribesmen would massacre everyone inside. Ignoring this threat, Lieutenant Hanks prepared to repel the attack by moving ammunition to the blockhouse and loading his cannon.

At nine o’clock on the morning of July 17, the Americans discovered that the British held the high ground overlooking Fort Michilimackinac with two 6-pounder cannon. To reinforce their threat of massacre, hundreds of Native American warriors came out of the woods and showed themselves to the fort. At eleven-thirty, a single cannon fired a warning shot, and then a small group of men with a white flag approached the fort.

Three of the men were prominent residents of the village. Captain Roberts seems to have deceived the civilians into believing his forces were much greater than their actual number. After the surrender, Lieutenant Hanks wrote to Brigadier General William Hull that 46 British regulars, 260 Canadian militia, and 715 Chippewa, Menomonee, Ottawa, and Winnebago warriors opposed him.

In the same report, Hanks listed his own forces as fifty-seven healthy soldiers, five men with illness, and one drummer boy. The Lieutenant discussed the options with his subordinate officers, but because they were facing an overwhelming force, they all agreed to surrender the fort.