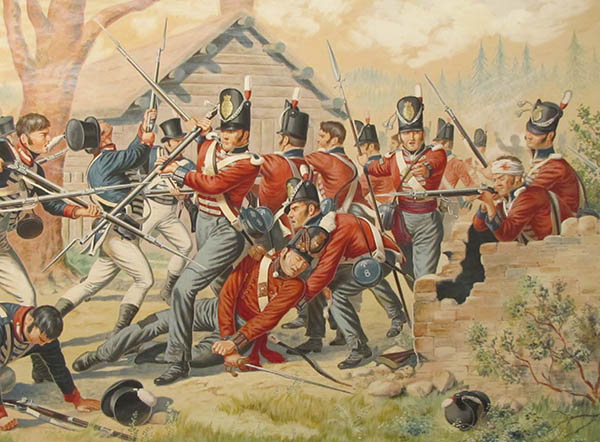 Disappointed with their lack of success during 1812, the United States military leadership used the winter months of 1813 to plan a new strategy for their spring campaign. Although Kingston was determined to be the most important British military installation on Lake Ontario, Major General Henry Dearborn and Commodore Isaac Chauncey elected to begin the Second Invasion of Canada by attacking York, Upper Canada. The weakly defended town of York (now Toronto, Ontario) was the location of the second most important shipyard on Lake Ontario and home to three important British warships.

The battle of York, a combined American navy and army attack on the provincial capital of Upper Canada, occurred on April 27, 1813. Brigadier General Zebulon Pike, a famous 24-year-old explorer and soldier, commanded the landing force. Opposing the surprise attack were a hodgepodge of British and Canadian regulars led by the unpopular Lieutenant Governor of Upper Canada, Major General Sir Roger Hale Sheaffe, supported by a few militia units and a small attachment of Missassauga and Ojibway tribal warriors.

The American Forces Establish a Beachhead

The initial American landing was blown off course by a strong easterly breeze. The unplanned beachhead location at the eastern end of Humber Bay was not ideal: a narrow beach at the base of a steep and heavily forested bank, one-half mile farther west than the intended invasion site. The first boats held sharpshooters in green jackets with black facings from Benjamin Forsyth’s U. S. 1st Rifle Regiment, and a skirmish soon developed between the forces trying to solidify their beachhead, and the tribal forces on the heights attempting to prevent the Americans from gaining a foothold. Naval schooners sailed close inshore and fired grapeshot into the defenders’ positions. As more blue-coated American regulars landed and spread out, they outflanked the Missassauga and Ojibway warriors and forced them to retreat. The American forces reached the high ground.

British regulars began a series of counterattacks. First, a company of the Grenadiers of the 8th (King’s Royal) Regiment fired a volley and charged with fixed bayonets. The combat was bloody hand-to-hand fighting and the Redcoats were repulsed. Next came attacks by a company of Glengarry Light Infantry Fencibles, a detachment of the Royal Newfoundland Regiment of Fencible Infantry, and survivors of the original Grenadiers’ charge. The Americans fought off these attacks as well.

The British were hopelessly outnumbered. Sheaffe’s total forces in York numbered approximately 650 men, while the American army had 1,700 soldiers available for the attack and 800 sailors on warships in the harbor firing large 24-pounder and 32-pounder cannon.

The British Withdraw to Their Weak Defensive Positions

Following the failed attacks, the York forces withdrew to a gun emplacement called the Western Battery, where two damaged and obsolete 18-pounder cannon were positioned. Gunners fired the nearly useless guns at the schooners in the harbor, but soon their supply of ammunition exploded, apparently the result of a soldier’s careless mistake. The accident caused a dozen casualties and rendered the gun emplacement indefensible: one cannon was out of action, and all of the infantry-killing grapeshot had been destroyed. The York defenders abandoned the position and withdrew to the lightly defended garrison.

The York garrison consisted of a single blockhouse within a wooden palisade guarded by a few small cannon. The position was untenable, with the naval forces bombarding the position and General Pike preparing an assault with his ground forces. General Sheaffe’s 650 troops had lost approximately 150 casualties, mostly British regulars, and they no longer held the tactical advantage. He ordered all British and Canadian regulars to abandon York while destroying the fort’s substantial powder magazine and the HMS Isaac Brock under construction in the shipyard.

The Americans Suffer the Majority of Their Casualties

At this point during the invasion, the American forces had suffered roughly 120 casualties out of their 1,700 men. When the British troops detonated the stone magazine, the resulting rain of falling rocks, timbers, and iron caused substantially more American injuries than had the fighting. Suddenly there were 250 additional casualties, including General Pike, who was struck and mortally wounded by debris from the explosion.