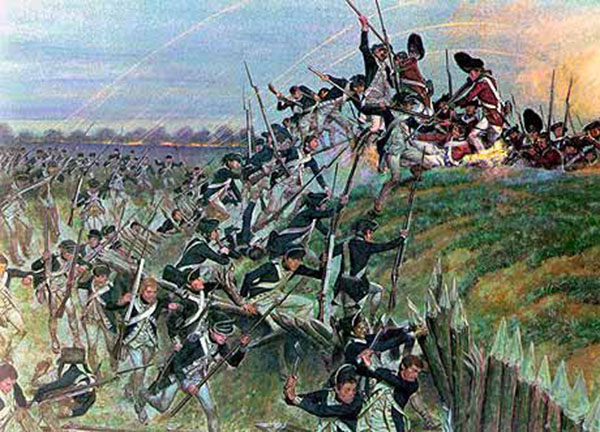 American soldiers reacted angrily towards the British retreat by stalling surrender negotiations and pillaging the town.

When the Battle of York ended on the afternoon of April 27, 1813, the American soldiers and sailors were angry. They had won a hollow victory.

The British Destroyed Their Supplies and Retreated

American anger intensified when they realized the British had also destroyed a warehouse full of naval stores and burned the nearly completed 30-gun frigate Sir Isaac Brock. Another warship, the Prince Regent, had sailed away several days before the attack. Of the three warships the U.S. Navy expected to capture, they were only able to salvage the schooner Duke of Gloucester.

The British regulars, whom the American army had battled all morning, escaped towards Kingston, and only local militia and town leaders remained in York to negotiate its surrender. Major General Henry Dearborn was so incensed that he delayed surrender discussions until the following day. After more than six hours of negotiations, the surrender terms were signed on April 28, 1813. The document guaranteed the safety of private property but permitted the seizure or destruction of all government property.

What happened after the battle is disputed to this day. Some accounts state that American soldiers discovered a scalp – or a judge’s wig they mistook for a scalp – and began taking retribution on the town of York. Others claim the looting was confined to a group of undisciplined soldiers and sailors together with British turncoats.

Starting the night of the battle, unruly mobs looted St. James Church, the town library, and several stores, smashed the town’s only printing press, robbed many private homes, and “confiscated” townspeople’s livestock. They burned the Parliament Buildings, the Governor’s residence, the Court House, and the Block House. The stealing and wanton destruction did not stop until May 1, when General Dearborn ordered his troops to burn the remaining military barracks and Government House and then return to the ships.

Results of the Battle of York

General Sheaffe was disgraced for fighting the battle piecemeal and leaving the town undefended; he was relieved of duty in Upper Canada and sent back to England. The British later revenged the destruction of the government buildings in York by burning the White House and U.S. Capitol building in Washington, D.C.

General Dearborn was criticized for barely participating in the battle. He remained on board the USS Madison until after the battle was won, General Pike was mortally wounded, and General Sheaffe and the British regulars had escaped.

For their trouble, the United States military gained two ships, the Duke of Gloucester and a privately owned vessel, the General Hunter, twenty-eight cannons, some British military stores and munitions, and £2,000 from the Provincial Treasury. General Sheaffe had forgotten his personal baggage in his haste to save his men from capture. Since he was the Lieutenant Governor of Upper Canada, Sheaffe’s personal effects were considered government property and seized by the Americans.