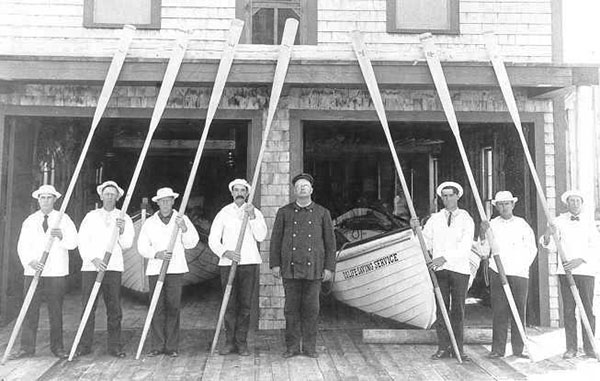 Before the existence of the U.S Coast Guard, the U.S Life Saving Service had to take the helm in the troubled high seas.

The United States Revenue Marine (also known as the United States Revenue Cutter Service) administered the stations with permanent crew members and volunteer crews. During the disastrous Carolina Hurricane of 1854, many sailors lost their lives at sea. Some of the deaths could have been avoided had the life saving stations carried better equipment and the Cutters Service had better crew training when dealing with the fallout from massive hurricanes. This caught the attention of United States Congress enough to allocate more money for a full time keeper and two superintendents at the life saving stations.

In 1871, the United States Treasury Department appointed Sumner Increase Kimball as Chief of the United States Revenue Marine Division. In order to keep things tidy as Revenue Marine Division Chief, he sent Captain John Faunce on inspection errands to each life station. He gave notice that some of the equipment was rusty, some useless, while others were in dire need of care. Captain Kimball was able to convince United States Congress for more money to operate the life saving stations and for the United States Secretary of the Treasury to hire more people for crew. New stations were approved, built and more regulations with higher performance standards became the norm.

By 1874, along the Outer Banks of North Carolina, the coast of Maine and Cape Cod, more stations were added. The Michigan Great Lakes area and the Houses of Refuge in Florida received additional stations within the next year.

The life saving stations fell into three categories. They were known as lifesaving, lifeboat, and houses of refuge. During periods in which boat wrecks were more likely to happen, full manned crews were on duty. The life boat stations were located near or in port cities because of waterfront structures. Heavy lifeboats could be readily launched when emergencies happened. They were mainly located on the Great Lakes of Michigan.

The lifesaving stations were situated in more isolated areas of the lakes. The houses of refuge were located on the South Carolina, Georgia and Florida coasts. A keeper with a small boat was stationed at each house. The organization’s duties did not include search and rescue attempts. One reason behind this was due to the fact that the southern part of the United States was warmer than the northern part. This meant that ship wrecked sailors were not likely to die from the extreme winter freezing temperatures of the rigid cold like up in the north. Therefore, shelters were only in need.

The End of the Life Saving Service