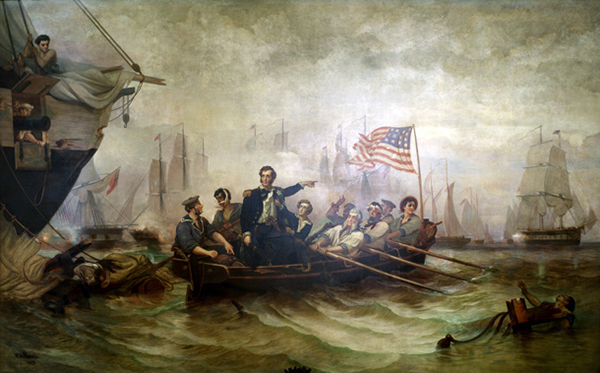 The victory of Perry’s fleet was a major naval battle of the War of 1812, ensuring U.S. control over Lake Erie and forcing the British to abandon Detroit.

On this day in history, September 10, 1813, Commodore Oliver Hazard Perry sent the message, “We have met the enemy, and they are ours,” after an American naval force of nine ships defeated a squadron of six British warships in the battle of Lake Erie off the coast of Ohio in the War of 1812.

The Americans had declared war in 1812 for many reasons, including trade restrictions, impressment of sailors into the Royal Navy, and British support of Indian tribes against American expansion in the West.

Following the fall of Detroit in 1812, the British took control of Lake Erie. To regain naval superiority, the U.S. Navy began building two 20-gun brigs, the USS Lawrence and the USS Niagara, at Presque Isle, Pennsylvania.

In March 1813, Perry, the new commander of U.S. naval forces on Lake Erie, arrived at Presque Isle, and found a shortage of men and supplies. While overseeing the building of the two brigs, he went to Lake Ontario and took part in the battle of Fort George in May.

Perry collected more sailors and gunboats for use on Lake Erie. He was almost intercepted by the new British commander of the Detroit and the Queen Charlotte, Robert Barclay, a veteran of Trafalgar.

The Battle of Lake Erie

After the two fleets sighted one another, the Americans began closing in. Barclay opened the battle at 11:45 a.m. with a long-range shot from the Detroit. The two navies exchanged fire for 30 minutes, with the British prevailing.

At 12:15, Perry was in position to open fire again. As his guns began pounding the British ships, he was surprised to see the Niagara slowing down rather than moving to engage the Queen Charlotte.

This delay allowed the British to focus their fire on the Lawrence. Although Perry’s gun crews inflicted heavy damage on the British, they were overwhelmed and the Lawrence suffered heavy casualties.

Perry ordered a small boat lowered and transferred his battle flag, which read “Don’t Give Up the Ship,” to the Niagara and sailed the undamaged brig into the fray. Most of the British senior officers had been wounded or killed by then. Barclay was wounded in the right arm.

As the Niagara approached, the British attempted to turn their vessels. The Detroit and Queen Charlotte collided and got entangled. Perry sailed directly into the British, surging through Barclay’s line, firing broadsides, pummeling their ships. By 3:00 p.m., aided by gunboats, the Niagara forced the British ships to surrender.

The battle had been closely contested for hours. Perry’s flagship Lawrence lost four-fifths of its crew and was a defenseless wreck. But Perry was unhurt and, when the smoke cleared, had captured the entire British squadron and secured American control of the lake, earning him the title “Hero of Lake Erie.”

After the battle, Perry sent to General William Henry Harrison, commander of the American Army of the Northwest, his famous message on the back of an old envelope: “We have met the enemy, and they are ours. Two ships, two brigs, one schooner, and one sloop.”

He also sent this message to the secretary of the Navy: “It has pleased the Almighty to give to the arms of the United States a signal victory over their enemies on this lake. The British squadron, consisting of two ships, two brigs, one schooner and one sloop, have this moment surrendered to the force under my command after a sharp conflict.”

Most historians attribute the American victory to “superior heavy metal.” Perry’s leadership has also been widely recognized. One British historian wrote that “it was as fortunate for the Americans that the Lawrence still possessed a boat that would float, as it was that Perry was not hit.”

In the first unqualified defeat of a British naval squadron in history, Perry won his complete victory at the cost of 27 Americans killed and 96 wounded. British casualties totaled 41 dead, 93 wounded and 306 captured.

The battle of Lake Erie forced the British to abandon Detroit, ensuring U.S. control for the rest of the war over the city, the lake and the Northwest, including Michigan, Ohio, Pennsylvania, and the coastal areas of western New York.

Following his success, Perry ferried Harrison’s Army of the Northwest to Detroit, where it began its advance into Canada. This campaign culminated in the U.S. victory at the battle of the Thames, breaking the Indian confederation of Tecumseh, on October 5, 1813.

Tecumseh’s death ended the Native American alliance with the British in the Detroit area. U.S. control of Lake Erie meant the British could no longer provide war materiel to their Indian allies, who therefore stopped fighting.

The battle of Lake Erie led to the signing of the Treaty of Ghent in 1814, which struck an accord between the two nations and ensured that Canadian territory under England’s control would be protected from intrusion by the United States.

Until 1814, the British Empire pursued a defensive strategy, repelling U.S. invasions of Canada. But after the Americans won control of Lake Erie and the defeat of Napoleon in 1814, the British adopted a more aggressive approach.

A major British raid burned Washington DC, but was repulsed at Baltimore. American victories at New York in September 1814 and New Orleans in January 1815 routed the major British invasions.

The battle of New Orleans and the earlier successful defense of Baltimore, which inspired the lyrics of “The Star-Spangled Banner,” the U.S. national anthem, led to a sense of euphoria over a “second war of independence” against Great Britain.

This ushered in an “Era of Good Feelings,” in which partisan animosity in the new republic almost vanished. Both the United States and Canada emerged from the conflict with a heightened sense of nationalism. Most historians today believe the War of 1812 ended in stalemate.