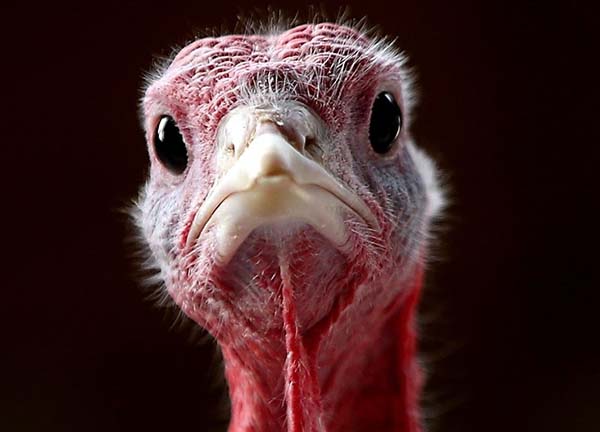 Turkey and Thanksgiving trivia is a fun family activity on Thanksgiving Day. Enjoy sharing some fun Turkey Day dinner trivia around the table this year!

The average weight of turkeys purchased for Thanksgiving is 15 pounds, meaning that approximately 736 million pounds of turkey were consumed in the United States during Thanksgiving in 2009.

Turkeys were thriving in North America when the Pilgrims first arrived. They took them back to England and other countries on their journeys.

President Abraham Lincoln proclaimed Thanksgiving a national holiday in 1863. In 1939, President Franklin Roosevelt moved Thanksgiving Day forward one week to the fourth Thursday in November. Some say this was to extend the Christmas shopping season.

The Color of Turkey

Wild turkeys have the dark colored feathers most associate with turkeys. However, most domesticated turkeys are the Broad Breasted White, a strain that is used for commercial meat production.

The Turkey – Our National Bird?

Wild turkeys can fly short distances up to 55 miles per hour, and can run at 25 mph. However, domesticated turkeys cannot fly, and cannot run as fast.
How Do You Sneak Up on a Turkey?

Turkeys do not have external ears, but have great hearing. They see in color – unusual in the animal world. Due to the position of their eyes in their heads, they have a field of vision of about 270 degrees, meaning they can almost see directly behind them. They have a very poor sense of smell.

The average turkey producer raises three flocks per year. Each of these flocks is an average size of about 15,000 birds.
On average, it takes 75-80 pounds of feed to raise a 30-pound tom turkey.
Males (toms) and females (hens) grow very differently, so they are separated.
Hens are usually marketed at 14 – 16 pounds, and are about 12 – 15 weeks old. Most hens are marketed as the whole bird; toms usually go for use in products or as turkey parts.
All turkeys are hormone and steroid free. No hormones are approved for use in turkeys.
Turkeys are raised in scientifically designed, environmentally controlled barns that provide maximum protection from predators, disease and bad weather. Turkeys roam freely around the barn, there are no cages.
No one cares more for a turkey than a turkey farmer. To mistreat a turkey – or any livestock would be to the economic detriment of the grower. A well-treated turkey will quickly grow to its full potential and provide consumers with a low-fat and high-protein source.

Turkey litter is a mix of manure and bedding. The bedding is biodegradable. Litter has good nutrients for crops, so it is used as fertilizer. Much is composted and sold as fertilizer for horticulture crops.

Several turkey farmers in Minnesota and other states are converting litter to electricity to operate the farm and sell to the local power company.
What States Raise the Most Turkeys?

Minnesota leads with over 45 million birds raised, followed by North Carolina and Arkansas.

In 2009, more than 247 million turkeys were raised; 226 million were for American consumers, the rest exported.

It is estimated that a turkey has 3,500 feathers. Most are composted and used on crops. Some are dyed for Native American costumes, some become quill pens, down is used for feather pillows. There is a rumor that “Big Bird’s” costume on Sesame Street is made from turkey feathers. Turkey skins are tanned and used for boots, belts and other accessories.

The ballroom dance known as the Turkey Trot was named for the short, jerky steps a turkey makes.

Turkey producers have used research and best practices to increase efficiency, resulting in an excellent value for the consumer food dollar. In fact, the price of turkeys has been dropping by over 4% per year since 1949. Turkey prices usually drop near the holidays, making the meat an even better value.