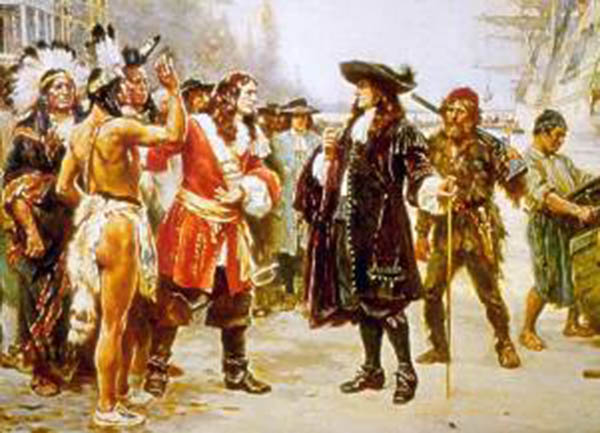 There were two primary motives for colonizing the New World: to acquire wealth and to convert souls. The mode of colonizing took very different forms.

The primary motives for colonizing the New World led to two very different ways in which countries went about trying to accomplish the goal of colonizing. The main impetus was adding lands and commodities to an empire which would increase a homeland’s wealth and status among the nations of the world. A secondary motive was the religious conversion of native peoples.

Modes of Colonizing Varied by Country: Exclusion or Inclusion

The way in which colonizing was accomplished took two very different forms: frontiers of inclusion and frontiers of exclusion. A frontier of exclusion meant settling in such a way that kept the groups of people separate so that very little intermixing of cultures took place. A frontier of inclusion can be defined as colonizing where a great deal of intermixing occurred between the native peoples and the colonizers.

England’s way of colonizing was through a frontier of exclusion. To the English, land was a commodity to be bought and sold. It was something to be fenced in, to be owned. They viewed the Native Americans, who looked at the land as a part of nature and to be used only to sustain, as a people who were not getting all of the benefits they could from the land. In fact, many of the English believed that because the Native Americans did not use the land properly, that “it was free for English taking.”

Sharing the Land was not an Option for the English

The English had no intention of sharing the land; they were intent on owning the land and using it for their own purposes. According to historian William Cronon in his work Changes in the Land, the policy of exclusion was founded on the idea that the difference between the two groups “was not that one had property and the other had none; rather, it was that they loved property differently.”

Another consideration in terms of the English example of a frontier of exclusion is how the many of the English perceived the Native Americans as a people. The Indian was viewed as a savage and an inferior race. The Indian male was seen as lazy and one that shirked his responsibility of providing for his family. The English saw Native Americans as having “little to contribute to the goals of English colonization and was therefore regarded merely as an obstacle,” according to Gary Nash in his book Red, White, and Black.

The French Tried Mixing the Cultures

In contrast to the English, the French and Spanish operated in a way which would be characterized as a frontier of inclusion in the New World. The French chose a much different approach with the Native Americans, Nash relates that “while the English typically used military force or guile to wrest land and political submission from their Indian neighbors, the French were forging relations of a much different kind with Indian societies.” The French communities consisted of small settlements which depended on the friendship of the native peoples.

Another major difference that characterized the French settlements was the proportion of males who had no inhibitions in including Indians in their personal relationships. These men took Indian mistresses, concubines, and wives and according to Nash, “exhibited no embarrassment at this mixing of blood and were hard put to understand English qualms about interracial relations.” This mixing made for a greater understanding between the two cultures and was a key ingredient in a frontier of inclusion.

To facilitate cooperation between the two peoples, many of the French learned native languages and customs. This differed greatly from the English who were looking to farm the land and therefore were seeking not to work with the Indians, but to get them out of the way.

The Spanish Way of Inclusion was Through the Use of Force

The Spanish also operated in a frontier of inclusion, but in a different way than the French. They came to the New World with military force in order to conquer. They forced the native peoples to work for them. Spanish efforts to convert the Indians was accomplished by persuasion mixed with force. This type of inclusion did not work nearly as well. Although there was a great deal of mixing, Indian peoples resisted Spanish attempts to impose Catholicism on them and to enslave them.

By analyzing the English, French, and Spanish, one can readily identify and understand the motives and the various ways in which the New World was colonized.