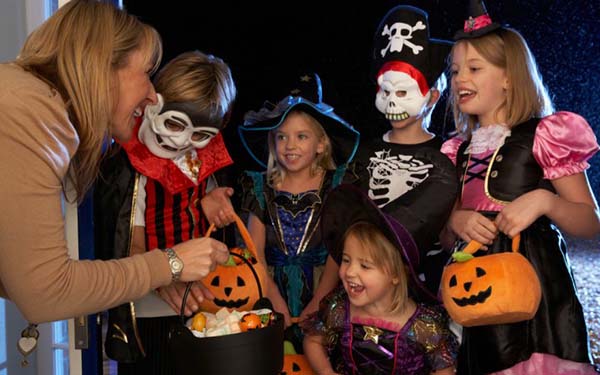 The History of Trick or Treating

Trick or treating is undoubtedly the most popular modern Halloween tradition. Its history can be traced back to the Christian All Souls’ Day parades in England.

During the celebration of All Souls’ Day, poor people would beg for food. Families would hand out pastries called “soul cakes.” These cakes were given in exchange for the promise that the beggars would pray for the souls of their dead relatives. This practice was encouraged by the church as the element of prayer was preferred over the ancient practice of leaving out wine and food for wandering spirits on Halloween.

The practice of begging for soul cakes came to be called “going a-souling,” and eventually, the tradition was adopted by children who would go door to door in their neighborhoods asking for money and food.

In the mid-nineteenth century, America was flooded with Irish and English immigrants fleeing the potato famine. These immigrants brought with them the precursor of our modern trick or treating tradition. From there, the history of trick or treating and Halloween night branches off into developing a distinctly American flavor filled with glowing pumpkins, candy corn treats and bobbing for apples.

The History of Halloween Costumes

The Halloween tradition of dressing up in costumes and masks comes to us from ancient European and Celtic history.

In the past, winter was a frightening time as food supplies often ran low, especially if there had not been a strong fall harvest. During the ancient Celtic celebration of Samhain, Celts had great bonfires to ward away the mischevious spirits that might damage precious crops. They would also dress in costumes of animal skins and masks to aid in intimidating and emulating restless spirits.

The darkness that accompanied the short days of winter terrified many people prompting them to stay indoors. On Halloween, when it was believed that restless spirits roamed the earth, people would leave food outside their homes in an attempt to stop the sprits from entering. Of course, not everyone could stay indoors on Halloween, and for those who had to venture out, masks were worn to trick the ghosts into thinking they were one of them.

Today, anything goes as far as costumes and masks. Adults dress up for parties, and children dress up to roam the streets in search of candy. From scarecrows to ghosts, goblins to witches, superheroes to television characters, Halloween costumes and trick or treating have become the linchpin of modern Halloween culture.