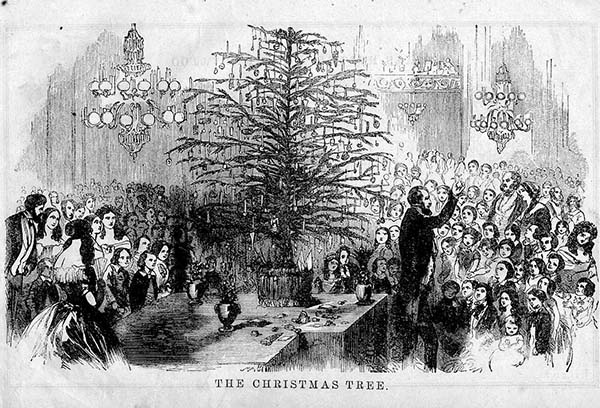 Long before the advent of Christianity, evergreen plants and trees had a special meaning for people during the winter. Just as it is customary for people today to decorate their homes during the festive season with pine, spruce, and fir trees, ancient cultures hung evergreen boughs over their doors and windows. In many countries it was believed that evergreens would keep away witches, ghosts, evil spirits, and illness.

Each year in the Northern Hemisphere, December 21st or December 22nd has the shortest day and the longest night of the year. This is called the winter solstice. Many ancient cultures believed that the sun was a god, and that winter came each year because the god had become ill and weak. They celebrated the winter solstice because it meant that at last the sun god would begin to get well. The evergreen plants and trees served as a reminder of all the other plants and trees that would begin to grow once the summer returned.

The ancient Egyptians worshipped a god called Ra, which had the head of a hawk and wore the sun as a disc on its crown. At the winter solstice, when the Egyptians believed that Ra was recovering from his illness, they would fill their homes with green palm rushes to symbolize the triumph of life over death.

In ancient Rome the solstice was celebrated with a feast called the Saturnalia, which was held in honor of their god of agriculture, Saturn. The Romans knew that the solstice meant that soon farms and orchards would again be green and fruitful. To honor the occasion, their homes and temples were decorated with evergreen boughs. In Northern Europe the mysterious Druids, who were the priests of the ancient Celts, also decorated their temples with evergreen boughs as a symbol of everlasting life. The Vikings in Scandinavia thought that evergreens were the special plant of the sun god, Balder.

Germany is credited with starting the Christmas tree tradition as it is known today. It is thought that the tradition was started in the 16th century when devout Christians brought decorated trees into their homes. It is a widely held belief that Martin Luther, the 16th-century Protestant reformer, was the first to add lighted candles to a tree. One winter night while he was composing a sermon and walking toward his home, he was struck by the beauty of stars twinkling between the branches of the evergreens. He went home to recreate the scene for his family, where he set up a tree in the main room and wired its branches with lighted candles.

In 1846, the popular royals, Queen Victoria and her German Prince, Albert, were sketched in the Illustrated London News standing with their children around a Christmas tree. Victoria was very popular with her subjects, and what was done at court immediately became fashionable in both Britain and fashion-conscious East Coast American Society. The Christmas tree had arrived.

The Evolution of the Christmas Tree

By the 1890s, Christmas ornaments were arriving from Germany, and the popularity of the Christmas tree around the United States was on the rise. It was noted that Europeans preferred small trees about four feet in height, while Americans preferred taller trees that reached from floor to ceiling.

Americans in the early 20th century used mostly homemade ornaments, while the German-American sect continued to use the traditional fruits, nuts, and marzipan cookies to decorate their trees. Popcorn that was dyed bright colors and laced with berries and nuts was later added. With electricity came Christmas lights, making it possible to light the tree for days on end. With this, Christmas trees began to appear in town squares across the country and having a Christmas tree in the home became an American tradition.

Christmas trees have come a long way since their humble beginnings. Despite the many lights and shining ornaments adorning these beautiful trees today, the message they inspire remains the same. Christmas trees represent hope and life, family and love. Each year the tradition of picking out a tree and decorating it with loved ones reinforces this important message.