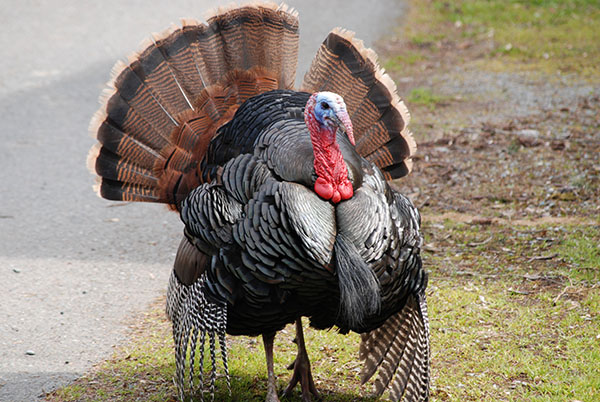 If the Pilgrims had landed at Independence Rock, about fifty miles southwest of Casper, Wyoming on the Great Plains, instead of at Plymouth Rock they probably would have served buffalo for their first official dinner of giving thanks.

When the Pilgrims celebrated that first recorded, though yet to be officially proclaimed, Thanksgiving in 1623 they, like the golden-brown foul they served, were new to this country. However, the turkey had been here longer than the pilgrims had. In fact, the turkey had been in the United States long enough for many to assume they were native to the new nation. This is not the case.

The bronze variety of this delicacy was first observed by so-called civilized man when the Spaniards conquered Mexico. The turkey, then being domesticated and bred by the Aztec and Zuni Indians, was the bird that some three hundred years later Benjamin Franklin would propose should be designated the national emblem.

When the Spaniards made their return voyage to Spain these swarthy sailors had some new feathered shipmates aboard. Thus, turkeys became Mexican immigrants to Spain.

By 1530 Turkeys were well established throughout Europe. One source states that when the English colonists came to America they brought some descendants of the Mexican turkeys with them. You might say the big birds sort of immigrated a round-trip migration to where their natural habitat became centered in the lower, east to west, portion of the United States. Considering that turkeys prefer to walk or run, rather than fly, evidently some of the birds took a long stroll northward to be introduced by the Indians as honored guests at the homes of the Pilgrims. This is reasonable since the turkeys had about one hundred years to get there.

Just how these birds came by their name is uncertain. Some believe the name comes from one of its calls which is described as a soft “turk, turk, turk.” Having raised these bronze beauties myself I have yet to hear any one of them make such an utterance, at least not in my presents. To me their sound is more like the musically timed bubblings from a somewhat plugged water hose. A more logical explanation of the origin of their name comes from a possible confusion of the turkey with the guinea cock that was imported into Europe from Africa by way of Turkey.

Another idea of their name source is that the head of a turkey resembles a Turkish fez. And the nickname “gobbler” relates to the loud “gobble, gobble, gobble” sound the male’s make. I have observed this sound, though I didn’t attempt to investigate whether a male or a female turkey made it. They didn’t exist long enough for me to make the distinction by their appearance before they, themselves, were “gobbled.”

The turkey is a large, handsome bird. From experience, if you are going to raise your own turkeys for the table, raise the white variety rather than the bronze. I raised the bronze ones because I thought it would be cool to have what looked like the old time Pilgrim variety wandering around the place. This was a great idea until I had twenty of them to dress out, clean, defeather, and pluck pin feathers one freezing November day. If you miss so much as one little bronze pin feather it shows up like a sore thumb, which is what I had when I finished as well as several sore and near frozen fingers after trying to pull out every one of those dark little wisps.

Scientifically, the turkey is closely related to the grouse, quail, and pheasant. Science or no, I have yet to see a grouse, quail or pheasant stand out in the rain with their beaks pointed upward, mercerized by drops of water falling from the sky until they drown of their own curiosity, or stupidity. Yes, turkeys don’t know when to get in out of the rain, so I discovered. But they were cute riding around on the backs of the goats. It was fun to watch a stranger drive up and see a dozen or so thirty pound birds converge on the person’s car, climb all over it and glare in through the windshield. It does tend to keep solicitors and salesmen at bay.

In spite of how or when turkeys arrived in America, or how they got their name, I am just thankful the delicious, sweet-natured creatures are here.