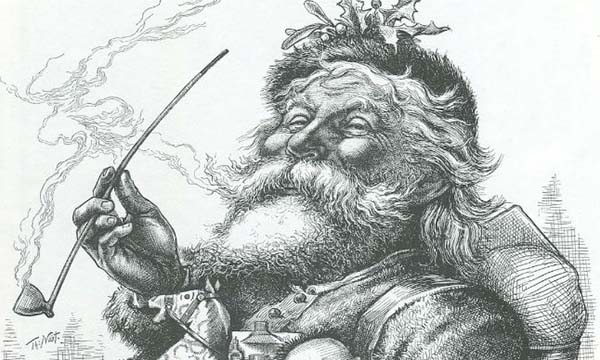 The night before Christmas, most children in the United States await the coming of Santa Claus and his toys. On Christmas morning, their faces will light up as they open up their treasures. Just who is this Santa Claus?

The modern-day Santa Claus is a character made up from the merging of two separate figures. The first was Saint Nicholas, a bishop who was born around 280 A.D. in Patara in modern-day Turkey. He gave away all of his inherited wealth and dedicated his life to helping the poor and the sick. One of the best-known tales of this benevolent man was that, in order to save three poor sisters from being sold into slavery or prostitution, he provided them with a dowry. St. Nicholas became the most popular saint in Europe. His feast day, the anniversary of his death, is celebrated on the 6th of December.

The second figure was Father Christmas. He was originally part of an old English midwinter festival. He dressed in a fur-lined green coat to celebrate the return of spring and was a jolly figure who went door-to-door to feast with families.

Groups of Dutch families in New York celebrated the feast of St. Nicholas in December 1773 and 1774. The modern name, Santa Claus, evolved from the Dutch corrupted name for the saint, Sinter Klaas (originally Sint Nikolaas). Sinter Klaas was said to wear a blue three-cornered hat, red waistcoat, and yellow stockings or a broad-brimmed hat and a large pair of Flemish trunk hose.

Santa Claus has had commercial appeal since 1840, when newspapers began to feature him in their holiday advertisements. In the early 1890s, the Salvation Army found itself lacking in money needed for the free Christmas dinners they provided to poor families. They put unemployed men into Santa suits and sent them out into the streets of New York City to ask for donations. These “Salvation Army Santas” were the precursors of the bell ringers of today.

In 1822, Clement Clarke Moore wrote “An Account of a Visit from St. Nicholas”, a long poem, for his three daughters. The image of a chimney-hopping Santa Claus distributing toys with the help of his reindeer-driven sleigh was formed from the poem. In 1881, political cartoonist Thomas Nast used Moore’s poem to create the first modern image of Santa Claus. He gave Santa his red-and-white suit, North Pole workshop, elves and his wife, Mrs. Claus.

The next time you see Santa Claus in the mall or in an advertisement, stop and reminisce over his history. He is a lot more than just a nice guy who gives kids toys!