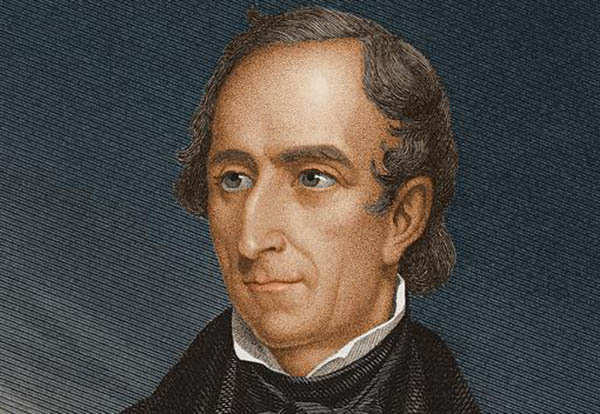 John Tyler was the first unelected President following the death of Harrison in 1841. His role was to set the direction for future “accidental Presidents”.

John Tyler born in 1790 was raised to be an Virginia aristocrat. One of eight children of John and Mary Tyler he was born into a family of wealth and power. His father John Tyler, Sr. owned a plantation of over one thousand acres worked by dozens of slaves. John, Sr. would be elected Governor of Virginia in 1808.

John’s mother died when he was seven years old. At twelve he started attending the preparatory school associated with the College of William and Mary from which he would receive his college degree in 1807. He studied law under the guidance of his father and was admitted to the Virginia bar in 1809. As his father had just become Governor, John accompanied him from their home in Charles City County to live in the state capital in Richmond about thirty-five miles away.

Tyler entered the law practice of Edmund Randolph, the young nation’s first attorney general. In 1811 he became a member of the Virginia legislature where he led a censure against delegates who had supported the creation of the Bank of the United States which he considered a dangerous broadening of Federal power.

Tyler saw no military action during the War of 1812, but had been a member of the militia.

In 1813 his father died leaving John both land and slaves. Two months later he married Letitia Christian, also from one of the leading families of Virginia. The next few years he was involved in state politics until his election to the United States House of Representatives in 1816 to fill the unexpired term of John Clopton.

Following the War of 1812 the attitude in the country was for expansion. Many felt that for the country to grow a strong banking system was necessary. There was sentiment for a standing army supported by increased taxes and tariffs, cheap land for settlers, and a economic base with industrialization replacing the agrarian way of life. It was thought that the way to achieve this was to have a strong centralized government.

Tyler like most of the Southern planter aristocracy were opponents to this plan. During Tyler’s years in the House he opposed the expansion of Federal powers and in 1820 would also lead the opposition to the Missouri Compromise.

Tyler did not seek reelection to the House in 1820 and returned to Virginia. In 1823 he was elected to the Virginia House of Delegates where he led the opposition to the popular vote to decide presidential electors. In 1825 he became Virginia’s governor.

Tyler returned to national politics being elected by the Virginia state legislature. Tyler was associated with the Jacksonian Democrats in the Senate mainly because of Andrew Jackson’s position on the Bank of the United States. However, during the Nullification Crisis of 1832 he opposed the passage of the Force Bill which would have allowed the Federal government to use military action against South Carolina to collect federal tariffs which that state’s legislature had declared null and void,

Although Tyler was in agreement with Jackson on his disapproval of the Bank of the United States he disputed redirection of deposits from the Bank to smaller institutions as an abuse of executive power for which he condemned “King Andrew” on the Senate floor in 1833.

Political war erupted in the Senate when Henry Clay moved for a motion to censure Jackson for his actions. Tyler joined with Clay, Daniel Webster, and John C. Calhoun in forming the Whig Party.

The Whigs were not organized in 1836 to hold a national convention, instead regional candidates were proposed including Harrison, Hugh White, and Daniel Webster. Tyler’s name was proposed in some states as a candidate for Vice President with White and in others with Harrison. The Whigs were defeated by the ticket lead by Jackson’s chosen successor Martin van Buren.

Campaign and Election of 1840

Factions in the Whig party resulted in the compromise candidate, William Henry Harrison’s nomination. Tyler was select as the candidate for vice president. In the election, Martin Van Buren was soundly defeated.

Harrison was inaugurated on March 4, 1841 and died on April 4th. For the first time the country had an unelected President. The United States Bank, Congressional reapportionment, and the issue of the annexation of Texas would dominate Tyler’s term, but perhaps his most obvious achievement was not be a place holder in the Office of President until the next election, but rather a President in action as well.