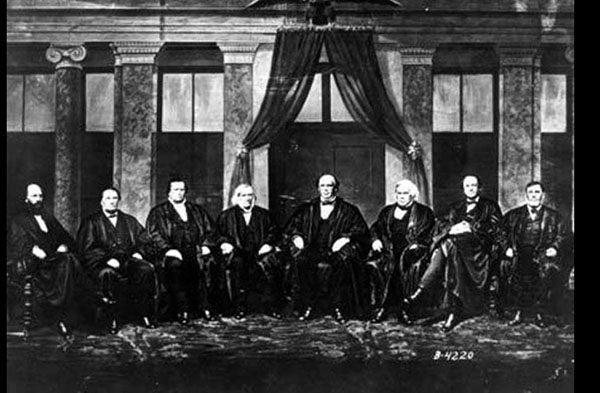 The Equal Protection Clause of the 14th Amendment of the U.S Constitution and the Due Process law were violated in this landmark Taylor Strauder murder case.

It was on Tuesday, October 21, 1879 that the U.S Supreme Court took on a case from out of state of West Virginia. This case involved the jury pools in West Virginia and how only whites may only serve on them. With this particular case, Taylor Strauder, a mulatto of 5 feet 10 inches in stature was arrested for the murder of his wife, allegedly having killed her with a hatchet.

When it came to jury selection to take place for his trial, there was not a single black person chosen as a juror because of color issues. This was seen as a blatant violation of the Equal Protection Clause of the Fourteenth Amendment to the United States Constitution and the Due Process law which is located in the Fifth Amendment of the United States Constitution. Associate Justice William Strong announced that the exclusions of black Americans due to race from the jury pools violated the Equal Protection Clause.

The main purpose of the controversial and historic clause was to assure civil liberties under U.S law to black Americans that were enjoyed by white Americans. The Fourteenth Amendment to the United States Constitution with the Due Process and Equal Protection Clause received proposal on June 13, 1866. It was ratified on July 9, 1868.

The Fourteenth Amendment was formed by Republican Congressman John Armor Bingham (1815-1900) from the state of Ohio. And as a judge advocate, he preceded over the Abraham Lincoln Assassination case and the impeachment trials of President Andrew Johnson.

Back in 1808, the U.S Supreme Court ruled in the United States v. Mullany case that blacks could indeed act as witnesses in the court of law as long as they were competent to do so. However, nearly all jurisdictions, especially in the southern states, denied blacks the right of testification.

The testimony from blacks was perceived by whites with scrutiny and suspicion. The act of serving as a juror was related to being a witness asked to be summoned before the court in order to testify. Despite that, there were holes in state laws that went against blacks participating in jury pools. This prompted another passage by U.S Congress to pass the Congress of the Jury Selection Act of 1968 which banned the exclusion of all American citizens in order to participate in jury pools if called up.

The 1968 Act was extended by the Sixth Amendment jury-trial provisions to other states partly thanks to the Duncan v. Louisiana case. That was a case which dealt with if the Sixth and Fourteenth Amendments that guarantee the right to jury trial in state prosecutions where the sentences are as long as two years may be enforced.