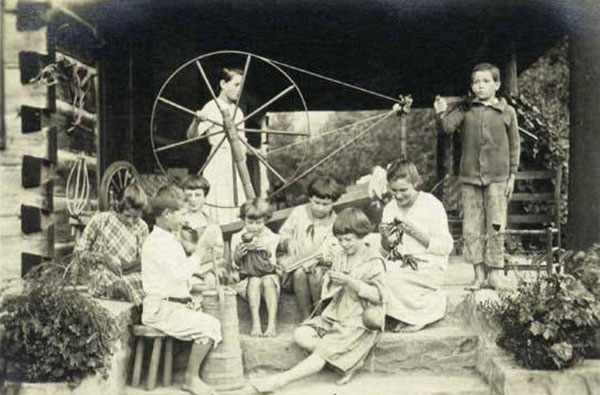 A brief history of the Indians and settlers of the Appalachian Mountains, and a look at the lives of the people who live there now.

The Appalachian Mountains are among the most beautiful in the world. While admiring the beauty and majesty of this mountain range, it is often easy to forget the settlers who made the journey to the Appalachians. It is easier still, to forget about the people who still live in these mountains. The people of the Appalachians are unique, and no where else will one meet a more independent-spirited people.

Before settlers arrived to the mountains, the Cherokee, ruled the land. In 1540, an expedition from Spain discovered these people along the Tennessee River. Eventually, “English traders” worked their way through the mountains, and developed a relationship with the Indians of the region; in order to secure the Carolinas as a colony.

The Shawnee arrived in the region in the late 1600s, and were not welcomed by the Cherokee. They decided to attack the Cherokee and sell them as slaves to the English, in 1692. After years of living with their enemy from the north, the Cherokee (“people of a different speech,” also known as “cave people”) created an alliance with the Chickasaw and fought to push the Shawnee out of their territory. In 1721, the British signed a trade treaty with the Cherokee. The treaty established boundaries, eventually broken, between the British settlements and Cherokee. Even so, the Cherokee did fight with the British during the “French and Indian War.” Unfortunately, as settlers continued to move inland, the Cherokee lost the fight for land, and were forced to comply to the demand’s of the new settlers.

All the years of trying to coexist and create peace treaties came to a bitter end when President Andrew Jackson took office. He forced Indian Nations to move west of the Mississippi. This resulted in the tragic “Trail of Tears.”

The main group of settlers which migrated to the Appalachians were from Scot-Irish, English, and German descent. These people were strong, independent, and “frugal.” They knew how to live off the land, and wanted nothing more than freedom from years of oppression by their countrymen. When traveling to the Appalachian Mountains, these people brought with them a deep rooted since of family and traditions.

These people learned to use the resources around them to survive. They became farmers, loggers, miners, and developed relations with each other in order to protect their land. The settlers were not looking to make large amounts of money or even try to make alliances; they simply wanted to live in a place they could make their own. By doing so, they created a culture unlike any in America.

People of the Appalachians are often joked of, and considered uneducated and unable to adjust to society. Those who settled in the area did not need book smarts. They needed strong work ethics and a desire to learn of the surroundings, and the willingness to do so has kept these people alive for centuries.

Some of the best music and stories have come from those who grew up in these mountains. People of the Appalachians have created musical instruments such as the dulcimer and banjo, and a type of music (bluegrass) which is their own. They continue to be miners, farmers, and loggers, and many still live on all or part of land owned for centuries by their ancestor’s. Despite the fact that people still consider these folks to be uneducated, many know how to read and write, and even the early settlers valued learning; but they also valued being skilled craftsmen and being able to apply what they learn to their way of life.

Do not take these people for granted. While the world around them “modernized,” these people have been able to keep their culture alive, which shows their dedication and independence.

The people in the Appalachians today are still skilled artisans, musicians, writers, story tellers, industrial, and filled with family values. Families in the region stick together and have many close relationships with those around them. They have a strong sense of community. Community gatherings, family gatherings, and heritage festivals are ongoing throughout these parts. These gatherings celebrate the traditions of the Appalachians and instill a sense of pride to all those present.

For years these people have struggled to keep traditions and history alive, and they continue to do so by celebrating their uniqueness and independence through skills passed down from past generations. This part of America has so much to offer, and should not be writ off as backwards way of living. Some of the strongest bonds exist in these parts, and despite years of development throughout America and even Appalachian communities, their history and traditions have survived.