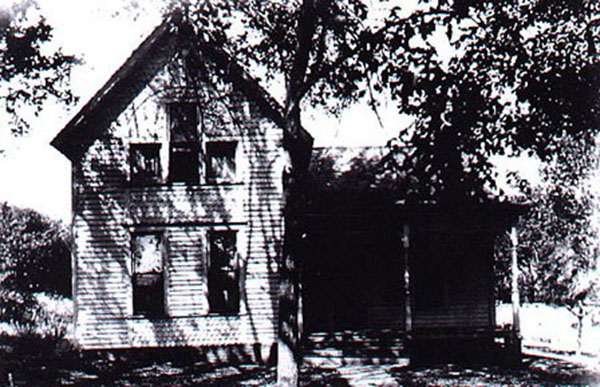 They were slain in the early morning hours: Josiah and Sara Moore, their four children and two of their children’s friends. Suspects were many; motives were far more complicated for detectives to develop. No one ever was convicted and punished.

The Essential Facts of the Villisca Crime

To term the Villisca slayings “axe murders” is a little misleading. Only one of the eight victims, Sara Moore, was struck by a sharp axe edge, doctors determined. The others were bludgeoned by the back or flat side of the iron weapon.

Medical evidence indicated the eight victims were murdered after midnight 9-10 June 1912. They had attended a church gathering earlier in the evening (a Sunday). Apparently, all were asleep when the killer attacked. The axe was left in the bedroom where the two child guests were lodged.

A neighbor, worried when observing no routine activity in the house, the next morning called at the door. No answer. She summoned a close relative who possessed a key. His immediate reaction, encountering the first bloodstained corpses, was to summon police. They found that all the doors were locked from the inside. The total carnage was unveiled and a fruitless investigation launched.

In the following weeks and months, Villisca residents took up arms, locked their doors (a practice generally deemed unnecessary in rural towns at the time) and speculated who might be the culprit. Suspicions fell on sundry possibilities and caused an ugly divisiveness among the population.

Suspects in the Villisca Case

They became difficult to keep count of. Suspects varied from transients to state government officials to nondescript hit men in the employ of schemers suspected or altogether unknown. There was a traveling preacher, George Kelly, who’d been in the area at the time; he was arrested five years later and actually tried, but acquitted.

To this day, some believe Frank Jones, a state senator from Villisca, hired a killer to do the deed. Jones and Josiah Moore were business rivals who reputedly harbored personal animosities as well. No one believes Jones himself was the axe man, but many think he engaged a mercenary killer, William Mansfield. Mansfield was suspected of mass murders in nearby states. He was brought into custody but exonerated for lack of evidence.

Numerous other killers were proposed over the years. In 1931, an arrested burglary suspect in Detroit told police he was the Villisca murderer. Oddly, he denied killing the two visiting sisters in the guest room where the axe was left. His name was Leroy Robinson; he went by the alias “George Meyers.” He claimed an anonymous crime syndicate operative had offered him $5,000 to carry out the atrocity.

His story complied with the known facts, to a tantalizing extent, but contained irregularities (notably, the number of victims—he insisted he killed only six). Robinson went on to serve prison time, but not for the Iowa slayings.

The house has become notorious for its alleged hauntings. The ghostly form of a man with an axe reportedly has been seen, children’s voices have been recorded, strange noises have been heard and objects mysteriously moved.

The Villisca Axe Murder House, which is included on the National Register of Historic places, is open for tours April through October. Group overnight stays can be arranged.

Several books, documentaries and other projects have probed the century-old Villisca “cold case file.” Paranormal investigators have scoured the facility with video cameras and sensory gadgets. Today, daring curiosity seekers pay a fee to spend a night in the Moore house.