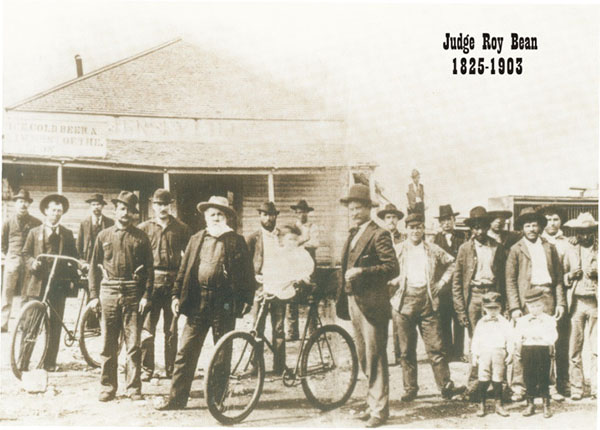 Roy Bean arrived in California in the spring of 1849 when California was an occupied American possession under military rule. San Diego had been transformed by the 1842 Santa Clarita gold rush from a sleepy village to a sleepy trading center for miners drawn by the Golden Promise of California.

In the spring of 1849 Roy Bean was reunited with his other brother Joshua Bean. Joshua had become a prominent and prosperous trader, saloon keeper and land speculator in San Diego. Joshua had served as a Captain in the Regular Army during the Mexican-American War and held the rank of Major General in the California State Militia. He was the first and only American elected San Diego Alcalde following the war and was elected the first Mayor of San Diego in 1850.

Roy Bean basked in the reflected glory of his brother. Roy would strut down the streets of San Diego dressed as an elegant Doñ; wearing el sombrero fino with embroidered pants and jacket; twin Colt revolvers and a silver hilted Bowie knife hanging from a tooled leather gun belt.

Attorney and historian Horace Bell, who knew Roy Bean and maintained a life long correspondence with him, described Roy in San Diego as five-foot-ten, 190 pounds, well built, with a rosy complexion, black silky hair with a neatly trimmed beard. “Well mannered, riding a spirited steed with a silver mounted saddle and bridle.” Roy Bean was “as handsome as an Adonis.”

Roy Bean had a reputation as a duelist and as a rake with women. Roy Bean gambled on cock fights, horse races and cards protected by his brother San Diego Mayor, General Joshua Bean. He was a big frog in a little pond that intimidated mild men and impressed the young women of the newly conquered California Frontier.

In 1851 Joshua Bean sold the San Diego City Hall to himself. After the City reclaimed its property, Joshua Bean left San Diego and opened the first saloon in San Gabriel.

Roy Bean stayed in San Diego. The women were beautiful, the fandangos were exciting and the pickings were easy. His romantic involvements, cock fighting, bragging and gambling provoked fights and duels.

Roy Bean lured a drunken Scottish immigrant named Collins into a duel on horseback with guns.

On Tuesday February 24, 1852 Bean and Collins met on the traditional dueling grounds of San Diego; Main Street. A mob turned out to watch the frontier blood sport and the merchants looked forward to a midweek business boost to fill their tills.

Both sides of Main Street were lined with the huge crowd. Sheriff Haraszthy was forced to allow the duel; all he could do was warn the combatants of the penalty for hitting an innocent bystander.

Bean and Collins galloped back and forth trying for a shot that would draw blood from the opponent and not draw jail time from the Sheriff. Round and round, the two men circled trying to shoot each other and not wound an innocent.

Roy Bean got close to Collins and “snapped” his pistol at Collins head. Collins fired two quick shots, missed and decided he had enough and tried to leave the Main Street of honor. Bean shot Collins in the right leg from behind and then Bean shot the horse out from under Collins. The horse and Collins collapsed in the crowded street.

Roy Bean became the first man to be incarcerated in the pride and joy of Sheriff Haraszthy, the first jail to be built out of concrete and stone in California.

While in jail, awaiting his legal fate Roy Bean was showered with gifts of food, wine and flowers from the pretty senoritas of San Diego who were enamored of the handsome, brave cavalier P. Roy Bean.

“Roy Bean and John Collins were arraigned before Judge Ames yesterday on a warrant issued by Judge Witherby charging them with an assault with intent to kill. They were bound over in the sum of $1,000 each, to answer at the next term of the Court of Sessions. Bean was also brought up for an assault and battery on the person of Rudolph Conrad, fined $25 and required to recognize in the sum of $100, to keep peace for 6 months.”

While Roy Bean was in jail San Diego City Attorney G.A. Benzen, wrote to a friend that miscreants could buy privileges; “The sheriff,” he complained, “would accompany inmates to a hotel” where they would “jointly take their eye-openers, bitters or nightcaps as the case may be.”

On April 17 The San Diego Herald reported that “the grand jury issued bills of indictment against John Collins and P.R. Bean, for assault with intent to murder and for sending and accepting a challenge. . .the paper further reported, ” Bean broke jail and escaped.”

At trial John Collins was acquitted of all charges.

Roy Bean told several versions of his escape the most common is that a woman brought him daggers hidden in tamales which he used to dig through the concrete and stone wall. Sometimes Judge Roy Bean would claim that he only needed one dagger to “break through” the walls of a public works project.

All of the versions included Roy Bean’s saddled horse waiting for him. Roy Bean probably walked out of jail and told the “daggers hidden in tamales” story to conceal the true collusion.

Roy Bean left San Diego to rejoin his brother in San Gabriel. He never used the name Phantley or the initial P again.