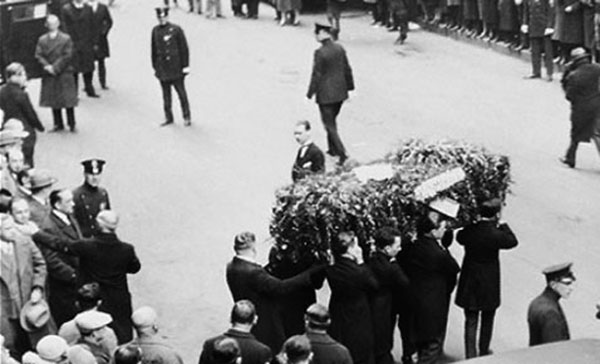 There has been much speculation on the cause of Harry Houdini’s death; the truth behind his demise is explained here.

Harry Houdini’s death has always caused speculation over what really happened. Many people believe he drowned performing the Chinese Water Torture Cell while others believe it was an assassination by a group of spiritualists.

It has been speculated that Houdini was killed by a McGill University student, J. Gordon Whitehead, who delivered multiple blows to Houdini’s abdomen while he was in Montreal. This was to test Houdini’s claim that he was able to take a blow to the body above the waist without injury.

The alleged true description of involving the circumstances surrounding Houdini’s death was given from two students; Sam Smilovitz and Jacques Price. The two of them met Houdini backstage after one of his shows.

Houdini was reclining on his couch while a student was sketching a portrait of him.

At this point J Gordon Whitehead entered Houdini’s dressing room requesting if he was the real Houdini he would allow him to withstand any blow to the stomach. As always Houdini agreed to the challenge, but before he was given time to tighten his stomach muscles Whitehead delivered three blows to Houdini’s stomach.

Whitehead continued to hit Houdini in the stomach several more times while Houdini displayed signs of immense pain. Houdini advised that if he had been given sufficient time to prepare he would have been in a better position to withstand the blows.

Houdini had allegedly been suffering from appendicitis for several days before but refused to seek medical help. It is likely his appendix would have burst on its own without the trauma; however Houdini continued his tour without seeing a doctor.

On 24th October 1926 Houdini travelled to Detroit, Michigan arrived at the Garrick Theatre for what was to be his last performance. Although Houdini had a fever of 104°F and a diagnosis of acute appendicitis Houdini continued to go on stage. He allegedly collapsed on stage and revived before continuing on. After the show finished he was taken to Detroit’s Grace Hospital.

Harry Houdini died of peritonitis from a ruptured appendix at 1.26pm on 31st October 1926, at the age of 52. The insurance company concluded that his death was due to the dressing room incident.

Houdini’s funeral was held on 4th November 1926 in New York with more than 2000 mourners attending. He was interred in the Machpelah Cemetery in Queens with the crest of the Society of American Magicians. Since Houdini’s death the Society holds a broken wand ceremony at his grave up to the present day.

In March 2007, Harry Houdini’s great nephew George Hardeen announced that the courts were requested to have Houdini’s body exhumed. The purpose of this was to find evidence that Houdini was poisoned by the spiritualists he exposed according to The Secret Life of Houdini.

The family of Bess Houdini opposed the exhumation and insisted it was a publicity stunt to help promote the book. It was later revealed that parties involved in the exhumation had never filed for it in the first place. To this day some still believe Houdini’s death was a result of exposing the spiritualists.