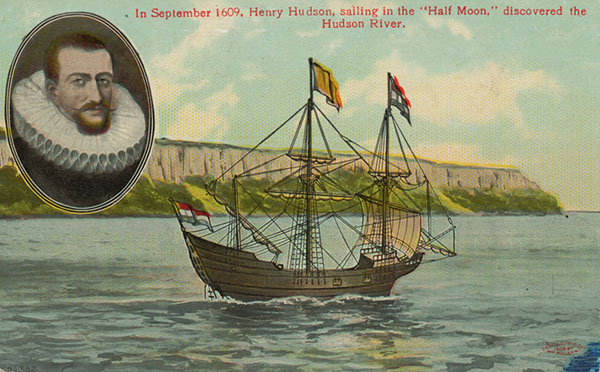 Two years after Jamestown was established and 11 years before the Pilgrims landed, Hudson reached the estuary of the “north river” that now bears his name.

On this day in history, September 3-4, 1609, English explorer and navigator Henry Hudson discovered the island of Manhattan in the New World of North America. The exact day is unknown.

After several voyages on behalf of English merchants to explore a Northeast Passage to India, Hudson was chosen by the Dutch East India Company to find an easterly route to the Orient. He was told to sail through the Arctic Ocean north of Russia and on to the Far East.

Hudson left Amsterdam on April 4 in command of the Dutch ship Half Moon. Due to ice, he turned the vessel around east of Norway’s North Cape in mid-May. Then, he pointed the ship west to try to find a passage in that direction.

Having heard rumors of a route to the Pacific Ocean by way of John Smith and Samuel de Champlain, Hudson decided to try to seek a westerly passage through North America. The Indians who gave the information to Smith and Champlain were probably referring to the Great Lakes.

Hudson and his crew of 20 reached the Grand Banks, south of Newfoundland, on July 2, and landed near what is now LaHave, Nova Scotia, in mid-July. They encountered Indians accustomed to trading beaver pelts with the French, but no deals were made.

The ship remained in the area for 10 days, with the crew fishing and replacing a broken mast. On July 25, a dozen men from the ship, armed with cannon and muskets, went ashore and attacked a village, driving the natives away, and taking their boat and other property.

On August 4, the Half Moon was at Cape Cod, from which Hudson sailed south to the entrance of Chesapeake Bay. Rather than enter there, he explored the Atlantic Coast, finding Delaware Bay, and continued to sail farther north.

On September 3, Hudson reached the estuary of the “north river” that now bears his name. He was not the first to discover the estuary, as it had been known since Giovanni da Verrazzano’s voyage in 1524. But Hudson thought he found what he was looking for when he entered New York Bay and saw Manhattan Island.

On September 6, a crewman was killed by Indians. Hudson sailed into the upper bay on September 11 and, the next day, began a 10-day journey up what is known as the Hudson River, sailing about 150 miles to what is now Albany before realizing it would not lead to his destination.

Early maps and sailing journals reveal that the area was viewed as inhospitable, with wild animals, poisonous snakes, mountains, and dense forests. The river itself was seen as treacherous, especially in the area now known as Hudson Highlands.

This area begins 50 miles north of New York City and extends for 15 miles between Peekskill and Newburgh. The hills rise more than 1,000 feet along either shore, and strong winds and fierce currents make sailing difficult and dangerous. Areas of the river here were dubbed World’s End and Devil’s Horse Race by the Dutch sailors.

On September 23, Hudson decided to return to Europe. He docked at Dartmouth on November 7, and was detained by authorities who sought access to his log. He managed to pass it on to the Dutch ambassador to England, who sent it to Amsterdam.
New Amsterdam

While exploring the river, Hudson traded with several native tribes and obtained furs. His voyage established Dutch claims to the region and to the fur trade that prospered when a trading post was established at Albany in 1614. New Amsterdam on Manhattan Island became the capital of New Netherland in 1625.

Since Hudson had been hired for the voyage by the Dutch East India Company, his explorations laid the foundation for Dutch colonization. The 1600s saw the influx of many colonists, and the area eventually became part of New York, controlled by Britain. As the quest for American independence unfolded, the Hudson River would play a major role

In 1610, employed by English investors again, Hudson navigated the Discovery to the far north and passed through what would become the Hudson Strait between Labrador and Baffin Island. And when he first entered the future Hudson Bay, he thought he had found the Pacific Ocean.

Weeks were spent exploring the area, but it soon became apparent that the long-sought passage still had not been found. Plunging temperatures created ice, which locked the ship in for the winter. The crew grew angry as starvation approached.

When the ice broke in the spring of 1611, Hudson wanted to explore farther to the west, but the crew mutinied, a crime for which they were never punished. Hudson, his son and six others were cast adrift in a small boat. No food or water was provided, and no one ever saw the great explorer or his companions again.

In 2009, Secretary of State Hillary Rodham Clinton and New York Mayor Michael Bloomberg welcomed Dutch royalty for the 400th anniversary of Hudson’s voyage. The festivities included NATO vessels, Dutch barges, and a new replica of the Half Moon, which sailed into New York Harbor.

“This land may be profitable,” Hudson said of the region he explored in America, “to those that will adventure it.”