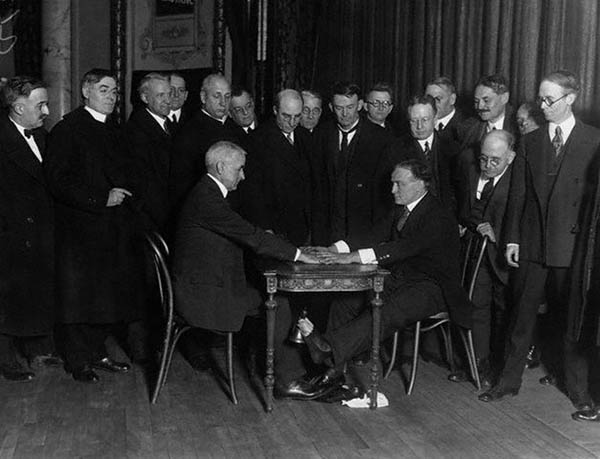 As Houdini’s career goes from strength to strength, his focus on exposing the frauds who exploited the spiritual world was his next challenge.

In the early 1920’s after Harry Houdini’s mother had passed away, he turned his attention to the exposing of self-proclaimed psychics. Houdini’s training in magic gave him the skills to expose frauds who had previously fooled scientists. Houdini did not approve of these so-called mediums exploiting grief stricken people’s emotions.

Houdini was a member of a Scientific American Committee that offered cash prizes to any medium who could successfully demonstrate the gift of contacting the dead or possess some kind of supernatural powers. No prize was ever given and Houdini had added another string to his bow.

Due to Houdini’s fame and popularity, he often attended séances in disguise accompanied by a journalist and a police officer. For each of Houdini’s conquests over the fraudulent mediums, be documented in his book, A Magician among the Spirits.

Houdini’s most famous case was the debunking of a medium called Mina Crandon, better known as Margery. The Scientific American magazine was ready to pay Margery $2500 for proving her supernatural powers were genuine. However, Houdini did not believe she possessed such powers and set out to prove this.

Margery was perhaps Houdini’s greatest adversary; the debate started in 1924 where Houdini staged a show where he intended to expose Margery’s so-called supernatural powers. The show was to be staged at the Symphony Hall in Boston. However just days before the show Margery declined; instead to present their own show at Jordan Hall.

Houdini’s quest cost he friendship of Sir Arthur Conan Doyle, the creator of Sherlock Holmes. Conan Doyle became a believer in spiritualism after the succession of deaths of his wife, son, brother, two brothers-in-law and two nephews. It was believed Conan Doyle turned to spiritualism in order to contact his family. He believed that Houdini was a powerful medium who was using his supernatural powers to expose the mediums.

Sir Arthur Conan Doyle attended a séance where he believed his late son, who was killed in World War 1 was trying to contact him. This resulted in Conan Doyle becoming a spiritualist leader who travelled across the globe to give lectures and defend spiritualism.

Houdini and Conan Doyle first met in 1920, during his tour of England. They found common ground with being believers in spiritualism, however Houdini’s interest was in the exposure of fraudulent mediums, and the two soon became adversaries.

Before Houdini died he and his wife Bess agreed that should his spirit come to earth he would utter the phrase ‘Rosabelle believe’ to prove it was actually him. This phrase originated from a play Bess performed when the two of them first met. On the anniversary of Houdini’s death every Halloween Bess would hold a séance to try and contact her husband. However after 10 years of no communication Bess ceased to continue the seances.

Bess Houdini did request Houdini biographer Walter B Gibson continue the séances. Before Gibson died he passed this duty on Dorothy Dietrich. To this day séances continue to be held to try and contact Houdini by famous magicians at various venues ranging from the Houdini museum in Scranton to the Excaliber nightclub in New York.