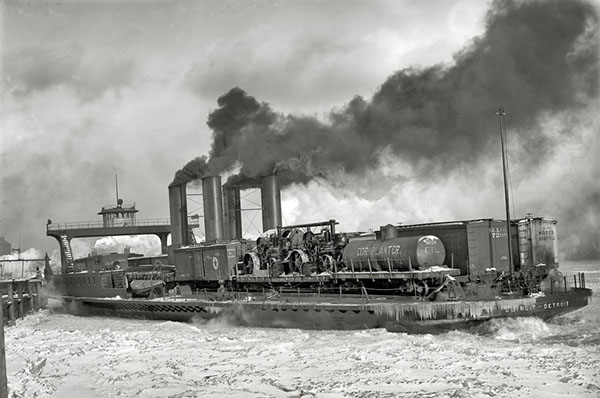 Cross-river railroad ferry operations were conducted between Michigan and Ontario for over 130 years.

In the year 1853 the first railroad to reach Windsor, Ontario, from the east was the Great Western Railway of Canada. The gauge, or distance between rails, of the Great Western was 5’6”. The standard gauge used by the United States railroads was 4’8.5”. Because of the difference in gauges the railroads were forced to remove their cargo from the railcars and then ship them across the river to Detroit on ferries. Once in Detroit the cargo was once again loaded onto railcars for further transit. The same process was used in both directions and was very time consuming. The first three ferries that were used for rail cargo were the Ottawa, Windsor, and Transit. The Ottawa and Windsor were side-wheelersand the Transit was propeller driven

Grand Trunk and the Swing Ferry at Sarnia

The Grand Trunk Western had previous experience running ferries at Sarnia, Ontario across the river to Port Huron, Michigan. The Grand Trunk began by using a menacing type of ferry called the swing ferry. The ferry was anchored by one thousand feet of chain to the American side of the river in Port Huron. Once loaded the ferry, tethered to shore by the chain, was set adrift and the river current would swing the ferry to the other side of the river. After a few incidents the ferry was deemed unreliable and discontinued.

A tunnel was built under the St Clair River in 1891 and the ferries Huron and International II had been mothballed. In 1897 the Wabash railroad acquired trackage rights on the Grand Trunk between Detroit and Windsor. Due to the increased traffic the Huron was sent to Detroit to join the Lansdowne and Great Western. Together they transferred 540 rail cars a day.

After completion of the tunnel in 1891 the Grand Trunk suspended ferry service until forced to reinstate the service in 1971 due to clearance problems in the tunnel. In 1995 a larger tunnel was completed under the St Clair River and the ferry service was once again discontinued. This made the Grand Trunk’s river ferry operation the last of the Great Lakes Car Ferries.

The Candia Pacific Railway completed tracks to Windsor in 1890 and opened a cross river ferry service to Detroit the same year. The ferries Michigan II and Ontariowere put in service in 1890. Both of the ferries were steel paddle boats and the Michigan II had the record of being the largest paddle ferry to see service on the Great Lakes. By 1916 the Canadian Pacific reached an accord with the Michigan Central and shifted all their freight and passenger traffic through the Michigan Central’s tunnel. Both of the Canadian Pacific ferries were sold. The Michigan II sank in a storm in 1927 and the Ontario sank in 1943.

When the Wabash railroad arrived in Detroit in 1897 it contracted with the Grand Trunk Railway to use their ferries for cross river traffic. When the Michigan Central completed their tunnel under the Detroit river the Wabash acquired three of the Michigan Central’s ferries, the Transport, Transport II, and the Detroit. The Wabash railroad eventually became Norfolk Southern after a series of mergers in the sixties, seventies, and eighties and operated ferries until 1994.

A Century of Service

For over a century the cross river ferry business thrived at the Port Huron—Sarnia and Detroit—Windsor crossings. Grand Trunk Western, Canadian Pacific, Pere Marquette, Wabash, and Michigan Central were all major railroads that used ferries to transfer rail cars across the river from the United States to Canada. Sadly all that remains of the once glorious fleets of ferries are barges, scrap metal, and the forlorn abandoned ferry slips that dot the shoreline of Detroit, Windsor, Port Huron, and Sarnia.