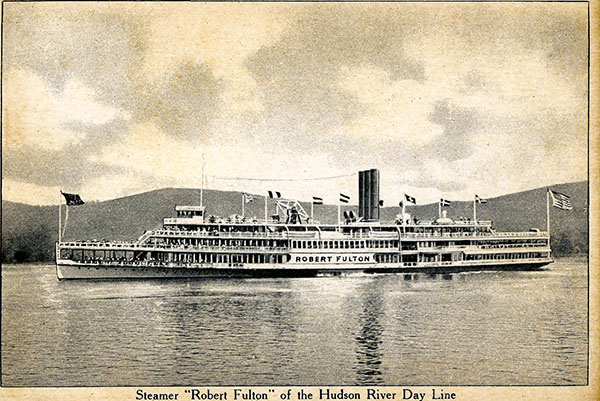 Later named the Clermont, it was the first commercially successful steamboat in the U.S. and began a new era of modern transportation throughout the world.

On this day in history, August 21, 1807, Robert Fulton’s steamboat set off from Albany down the Hudson River on a return voyage to New York City, completing the last leg of an historic, 300-mile round trip in 30 hours.

Born to Irish immigrant parents in Pennsylvania in 1765, Fulton began his career as an artist, painting portraits, including one of Benjamin Franklin. In 1786, he traveled to London, where he studied art with Benjamin West, but switched his interest to engineering because he was fascinated by canals, roads and bridges.

After 1793, he gave up painting as a vocation, pursuing it only for his own amusement, concentrating instead on shipbuilding and canal navigation. His illustrated pamphlet, A Treatise on the Improvement of Canal Navigation, was published in 1796.

In 1794, Fulton considered using steam to power a ship. Seven years earlier, John Fitch had successfully demonstrated his steamboat on the Delaware River in Philadelphia, but no one had been able to make a mechanical and commercial success of the idea.

In the late 1790s, Fulton worked on designing and building explosive torpedoes and a submarine, the Nautilus, first in France and then more successfully in England. In 1801, he was commissioned by Robert Livingston, recently appointed U.S. minister to France, to build a steamboat. His experimental vessel soon operated on the Seine River in Paris.

In 1803, Fulton ordered a disassembled engine with many duplicate parts from Boulton and Watt, the world’s leading engine builders, to be delivered in New York. But it was 1806 before he obtained permission to export the engine from the British government, which had banned their export, that Fulton was able to sail for America.

Something of a celebrity, Fulton set out to build a ship powered by the English-built steam engine, which was put together in New York. One challenge was to determine the right proportions for a steamboat. Fulton thought it should have a long and narrow hull, but he was later proved wrong.

Livingston had been granted a monopoly on steamboat navigation in New York waters. Although he had advocated a form of jet propulsion — water forced out the back of a ship under high pressure — he and Fulton settled on paddle wheels as the best method. Fulton’s first steamboat was 125 feet long and 20 feet wide, with side paddle wheels and a sheet iron boiler.

On August 17, 1807, Fulton’s steamboat, named the North River Steamboat of Clermont, which the press shortened to Clermont, made the trip from New York City to Albany upriver on the Hudson. At an average speed of five miles per hour, it returned four days later to New York, cutting 64 hours off the usual sailing time.

“My steamboat voyage to Albany and back has turned out rather more favorable than I had calculated,“ Fulton wrote a few days later. “The distance from New York to Albany is one hundred and fifty miles; I ran it up in thirty-two hours and down in thirty.

“I had a light breeze against me the whole way, both going and coming, and the voyage has been performed wholly by the power of the steam engine. I overtook many sloops and schooners beating to windward and parted with them as if they had been at anchor. The power of propelling boats by steam is now fully proved.”

At his shipyard in New Jersey, Fulton built 17 more steamboats, a ferryboat, a torpedo boat and, under the direction of the U.S. Congress, a steam-powered frigate, the world’s first steam warship, in 1812. He was the first to establish a commercially successful line of steamships, which led to a transportation revolution. He was also a member of the commission that recommended building the Erie Canal.

Fulton died in New York on February 24, 1815. He is buried in the Trinity Church Cemetery in New York City, alongside other famous Americans such as Alexander Hamilton. In 1816, a marble statue of Fulton was donated to the National Statuary Hall Collection in the U.S. Capitol. He was also honored for his development of steamship technology at New York City’s Hudson-Fulton Celebration of 1909.

Robert Fulton is popularly but inaccurately considered the inventor of the steamship. He succeeded, where a dozen other inventors failed, for several reasons. He had a wealthy, powerful patron in Livingston, who had a monopoly on steam navigation in New York State.

Fulton also began his work with the first-class motor purchased from the British company owned by James Watt, the inventor of the steam engine. Previous inventors had to build their own engines.

And Fulton hired mechanics who had in the previous 20 years gained invaluable experience with steam engines. It was Fulton’s luck and pluck to be able to combine these elements into a commercially successful steamboat business.

“The American dream of rags to riches is a dream for a reason,” Fulton once said. “It is hard to achieve; were everyone to do it, it wouldn’t be a dream but would rather be reality.”