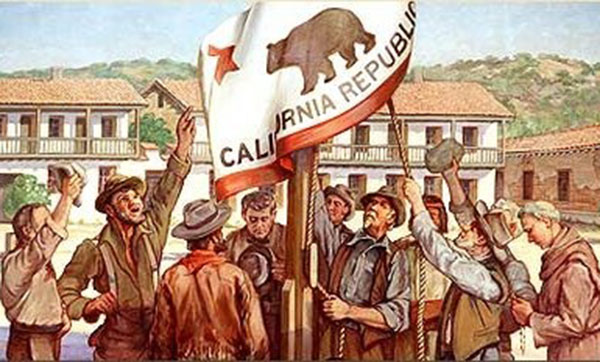 On the morning of June 14th, 1846, a ragtag band of thirty-three armed, Anglo-American settlers descended on the undefended, former military garrison town of Sonoma in Northern California, and overthrew the few remaining Mexican authorities on the grounds that they were “oppressed by a military despotism,” among other charges, in what came to be known as the Bear Flag Revolt. The ease with which they took the town and the total absence of troops apparently did not relieve their fears of “military despotism.” Why had the rebels taken such drastic action?

The Bear Flag Revolt cannot be viewed in isolation. Although the settlers would make California an independent republic for twenty-four days, they were emboldened to act by the appearance of a couple of American military officers in California in 1846. The puzzling actions of those officers contributed to the belief that the United States was scheming to strip Mexico of California. They also stoked fears of repressive actions by the Mexican government in California, which in turn spurred the settlers to insurrection.

At thirty-three years old, Captain John Charles Fremont was already a famed explorer of the West. His narratives of his expeditions, co-written with his wife, Jesse Benton, were devoured as adventure stories by people all over the United States. He was the son-in-law of Senator Thomas Hart Benton, an ardent expansionist.

On his third western expedition with sixty armed men, Fremont had received permission from Mexican General Jose Castro to rest his horses in California. Castro confined Fremont and his men, however, to the valley of the San Joaquin River, away from Mexican pueblos and ranchos along the coast.

The Stand on Gavilan Peak

Ignoring Castro’s restrictions, Fremont immediately turned south and traveled through and stayed near San Jose, Santa Cruz, and the Salinas Valley. On March 5th, 1846, Castro sent a messenger warning Fremont that he had violated the terms of his stay, and should now leave the province. Fremont haughtily refused, and took up a fortified position northeast of Monterey on Gavilan Peak, where he raised the American flag.

Castro had a number of reasons to be alarmed at this action. In December of 1845, the U.S. Congress had annexed Texas, a Mexican province taken by independence-minded Anglo-American settlers. Although there were only about a thousand American settlers in California in 1846 compared with fourteen thousand European Spaniards and people of mixed blood, more recent arrivals had been a new type.

They balked at learning Spanish and adopting Catholicism, and remained aloof from California’s social and political life. According to historian Lisbeth Haas, “many of them believed themselves superior to the Californio and Indian populations, expressing their right to the land in conjunction with their notions of white racial superiority.”

The U.S. and Mexico were moving closer to war over Texas by the day, and now a captain in the American army was raising the American flag and building a fortified redoubt on a hill near Monterey. Castro gathered a force of two-hundred and fifty men, and began preparing for an assault. The mercurial Fremont quickly abandoned the position on the evening of March 9th, after the American flag had inadvertently fallen over, and began moving north.

In spite of Fremont’s sudden disappearance from Gavilan Peak, many Anglo-Americans were encouraged by his defiance of the Mexican authorities. Referring to the Gavilan affair, historian Alan Rosenus wrote that “Fremont’s provocation of the Californians, if not a direct cause of the revolt, was certainly a warning of what was to come.”

But Fremont’s erratic behavior had only just begun. After refusing Anglo settlers’ direct requests to lead a revolt in Sonoma, Fremont and his men traveled to Klamath Lake, Oregon. He was intercepted there on May 8th, 1846, five days before the United States would declare war on Mexico, by a confidential agent of the United States, U.S. Marine Lieutenant Archibald Gillespie.

Gillespie delivered letters from Senator Benton and Secretary of State James Buchanan. Fremont would later claim that the gist of the letters was that he should return to California, and “find out any foreign schemes in relation to California and, so far as might be in my power, to counteract them.” He also stated that “it had been made known to me now on the authority of the Secretary of the Navy that to obtain California was the chief objective of the president.”

This was supported by President James K. Polk’s diary entry for October 24th, 1845, in which he stated that “the people of the United States would not willingly permit California to pass into the possession of any new colony planted by Great Britain or any foreign monarchy, and that in reasserting Mr. Monroe’s doctrine I had the fine bay of San Francisco as much in view as Oregon.”

Fremont returned to the Sacramento area with Gillespie, and on June 6th sent horsemen up and down the valley with unsigned warnings that a band of 250 Californios had been spotted on their way to Sacramento, burning houses, destroying crops, and driving off cattle. If Fremont’s “stand” on Gavilan Peak had stirred Anglo-American immigrants, his reappearance with the mysterious Gillsepie, and proliferation of anti-Mexican propaganda created near pandemonium. The combination of Fremont’s presence, with its implied American support, and the fear spread by the warnings about purported Mexican attacks, spurred the settlers to take action.

Since there are no extant letters or documents proving that Fremont’s actions were ordered by Polk or other government officials, historians have generally agreed that Fremont acted on his own, albeit in harmony with Polk’s eventual war aim of acquiring California. While Fremont’s contradictory actions and explanations over the years have befuddled some historians, most agreed with Hubert Howe Bancroft that “Fremont’s strongest incentive was personal ambition.”

After California was safely part of the United States and Fremont had been given the moniker the “Conqueror of California,” it would hardly be appropriate for him to be seen as a passive figure in the background. Accordingly, over time, he began taking credit for a more direct role in directing the Bear Flag Revolt.