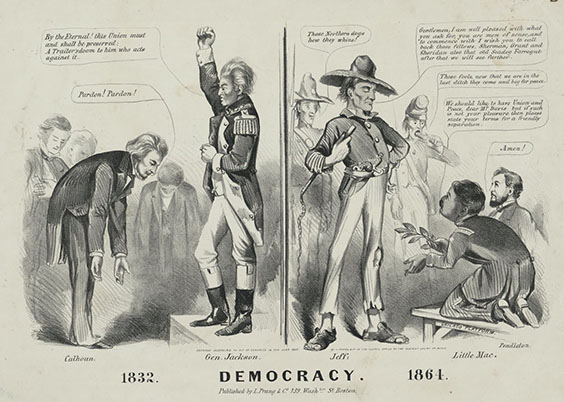 Secession from the Union (even talk of seceding) is a desperate gamble even with significant support. Committing this act of treason alone is absurd. And committing it alone, when Andrew Jackson was Chief Executive, was tantamount to suicide. South Carolina voted for and nearly did the deed as early as 1832.

As President Jackson would prove, his former Vice President John C. Calhoun, now Senator from South Carolina, and other Charleston firebrands, had misjudged both their man and their government. As tensions began to rise, Jackson waited until the annual Jefferson Day dinner and … fixing his eyes on … Calhoun … [gave] the toast: “Our Union: It must be preserved!”

Two Federal tariffs (1828/1832) were believed to unfairly punish South Carolina and benefit Northern manufacturers. A PBS documentary called them … the famously high tariffs (especially on many goods grown in the South) and … on goods … that the … Southern states often had to import …

Carolina declared both … Tariff[s] … null and void. To defend nullification, the … legislature voted to raise an army. Raise an army against Andrew Jackson – famous duelist and victorious general?!

John Calhoun resigned as Jacksons Vice President, to be named Senator for the secessionist state. He assumed leadership against the tariffs and Jackson himself. According to scholars at the Library of Congress … nullification, which asserted that a state could on its own … declare a federal law unconstitutional, had … [been discussed] … but never to such a dangerous degree.

While Senator … Calhoun might consider … nullification … a constitutional issue … for Jackson it was a … question … of whether the nation would continue to exist …. Jackson believed that … unity was the closest thing to a guarantee of security…

With the crisis at flash point, the President declared … it is the …most sacred… part of my obligation to preserve the union of these states, although it may cost me my life. Andrew Jackson was not simply grandstanding. … Jackson drew … a bright, sharp line, defended by arms ….He would die with the Union, he said …And he would take many with him.[emphasis mine]

On the Knife Point of Civil War

As … South Carolinians … were openly arming, forming regiments and planning on secession …, the President was pushing executive and legislative branch power to their limits. Jackson asked [Congress]for three U.S. artillery divisions .… As soon as Congress passed the Force Act, the President sent eight ships into Charleston harbor, and 5,000 muskets to Fort Pinckney, precursor to Fort Sumter

Andrew Jackson was not, however, all about war. Besides military preparations, he issued … his Proclamation to the People of South Carolina, considered the greatest state paper of the era, [making] … it clear that any action … to uphold nullification by armed force was treason.

Surprisingly, the President asked Congress to lower, though not quash, the tariffs. At the same time, Jacksons experience as a soldier and a general caused him to remain extremely wary of South Carolina intentions. While urging Congress to reduce the tariffs, he quietly asked Congressional leaders to increase the Presidents powers to enforce Federal laws. Jackson concurrently asked the legislature to embark the naval and army resources with which the President could strike militarily if needed.

Amidst the brinksmanship, negotiations and deal-making were also alive. Senator Henry Clay of Kentucky worked to conciliate South Carolina Congressmen before they walked into treason and destruction.

Speaking in the Senate to Carolinian fire eaters, Clay reminded them that … he who loves the Union must desire to see this agitating question brought to a termination … Clay persuaded Congress to issue a lower, “Compromise Tariff.” Tariff protection against foreign goods would remain, while tariff rates would decline annually, and run out by 1842.

Congress passed Clays bill and President Jackson signed it into law. South Carolina accepted the compromise and rescinded its tariff nullification The Nullification Crisis … revealed the … fear ,,, among … planters as early as the 1830s. … that the Federal government might tamper with … slavery … it was a rehearsal for the … crisis of the 1850s that would culminate in the American Civil War.

There were critical differences between the two crisis periods. Immediately before the Civil War, the nation had President Buchanan, who was pathetically sympathetic to the planter aristocracy.

1832 had President Jackson, a Southerner who, while he owned slaves, revered the United States of America, and would eagerly use military and legal force to maintain it. South Carolina was on its own this time, as well. Within three decades the political, military, geographic and cause-supporting standards would change.