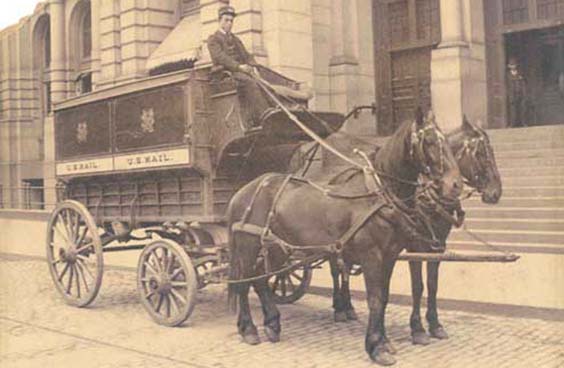 In one form or another since colonial times, this simple act of delivery has been the endpoint of a complex process helping American communities and organizations to function.

United States Postal Service statistics in 2009 reported 27,161 post offices with a career workforce of over 623,000 and more than 150 million delivery points. This is a far cry from the original mail station established on a trade route in the 1630s and indicative of the Post Office’s growth alongside the growth of America.

In early colonial times, letters and parcels were delivered by hired couriers. Ongoing contact with the British Isles and continental Europe led to the creation of a municipal delivery service by the Government Court of Massachusetts in 1639. Fairbanks’ Tavern of Boston was made the first American mail repository in the European tradition of using taverns and inns as points of exchange.

The postal network grew during the late 1600s, operating within colonies and linking one colony to another. Northern colonies such as New York and Pennsylvania established government departments, while southern colonies retained private messengers, most of whom were slaves. A centralized network was formed after 1692, when entrepreneur Thomas Neale received a 21-year grant from the British government to create a North American postal system. Great Britain acquired the system in 1707, a few years after Neale’s death.

The 21st century isn’t the only time that American post offices have faced a budget deficit. When the network first operated under Neale, it sustained heavy losses. It did not turn a profit until 1760, after a Bostonian named Benjamin Franklin spearheaded reforms. Franklin, appointed a joint postmaster general by the Crown and later the first Postmaster General of the United States, is credited with improving routes, setting regular post times, and beginning the first nighttime shipments to accelerate delivery between cities.

As the United States grew in area and population, so did its postal system in manpower and amount of work performed. In 1790, there were only 75 post office locations in the country. By 1840, the number had expanded to 13,468 across 26 states and assorted territories. A standard letter from Washington, D. C. to Nashville, Tennessee required only 11 days for delivery in 1822. When first calculated in 1890, the U. S. postal system handled over four billion pieces of mail annually.

Ongoing efforts were made to accelerate delivery, though results varied. Mail was first transported by steamboat in 1813, which would allow more frequent delivery to places such as California and Oregon. Shipments by rail began informally during the 1830s and mail was first flown by airplane in 1918, connecting Washington, DC to New York City.

Originally, a postmaster would write a shipment fee by hand in the letter’s upper right corner. In 1842, local postmasters were allowed to sell stamps that indicated payment. The stamps, called ‘provisionals’ by collectors, were too expensive for average customers to purchase in quantity. Standardized rates for provisionals were established by the U. S. government in 1845, though they were still only valid in the post offices from which they were bought.

The first postage stamps to be issued nationally, a five-cent stamp with an image of Benjamin Franklin and a ten-cent stamp with George Washington, were sold in 1847. The stamps were printed on adhesive, non-perforated sheets that clerks cut with scissors.

Postal rates, which could be paid by the sender or recipient, were originally determined by the number of pages mailed in a letter and the distance each letter would travel. This changed through a federal act in 1863, after which rates were based solely upon weight. The 1863 legislation also created mail in first, second, and third classes. Packages over four pounds in weight were not accepted by post offices and had to be shipped through outside carriers before the launch of parcel post in 1913.

The Post Office Department, as the postal system was originally called, existed as part of the United States Cabinet. Sweeping changes took place with the Postal Reorganization Act of 1970, which addressed issues such as outdated mailing systems, fragmentation of the postal network, and cost effectiveness. The legislation, signed by Richard Nixon, turned the Post Office into a free-standing entity of the executive branch called the United States Postal Service, the postal system’s current form.

With the emergence of fax machines, electronic mail, and Internet-based commerce, the U. S. Postal Service has faced steady declines in the number of pieces handled and growing budget deficits, projected at $238 billion in the year 2020. The mail, like other facets of American life, has experienced shakeups caused by new developments in technology and has yet to find ways of dealing with them.

Difficult changes have been made in U.S. history regarding the systems through which mail is delivered. Changes to be made in upcoming years will no doubt have similar, far-reaching impact on how the U. S. population communicates.