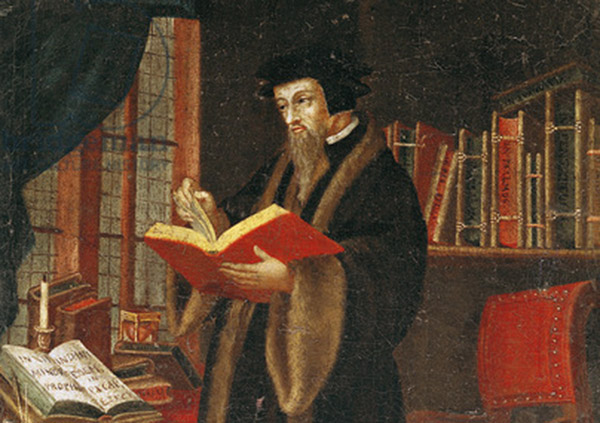 According to a new publication celebrating America’s ties to Geneva, produced by the United States diplomatic mission in that city, the first major connector linking Geneva with the U.S. is Protestant reformer Jean Calvin (1509-1564). Calvin was a French theologian who settled in Geneva and not only made a huge impact on it, turning it into the ‘’Protestant Rome’’, but in the hyperbolic words of German historian Leopold von Ranke was ‘’the virtual founder of America.’’

Calvinist Geneva welcomed Protestants fleeing Catholic persecution in various European countries not least England, and it was here that William Whittingham and other scholars produced the Geneva Bible—in English— and published it in 1560.

The Geneva Bible was the most widely read English version of the Bible in the 16th and 17th centuries, and pilgrim William Bradford brought a copy (today in the Pilgrim Hall Museum in Plymouth, Massachusetts) to the U.S. on the Mayflower in 1620.

Hence von Ranke’s words. Less dramatically, Connections links the Geneva Bible to ‘’the affection and kinship early American settlers felt for [Geneva],’’ which may explain why some 37 cities in the U.S. are named Geneva.

After Calvin comes Thomas Jefferson (1743-1826). The writings of a Genevois university professor, Jean-Jacques Burlamaqui (1694-1748), made a big impression on him and other founding fathers. According to Connections, ‘’scholars believe that Burlamaqui’s words, including the phrase ‘the pursuit of happiness’, may have provided inspiration for some of the most eloquent passages in the Declaration of Independence‘’ of which Jefferson was the main author.

Jefferson also appointed Geneva-born Albert Gallatin (1761-1849) as his Secretary of the Treasury. Gallatin was actually the longest-serving treasury secretary in the history of the U.S., and was instrumental in raising the money for the Louisiana Purchase in 1803. The purchase doubled the size of the young nation.

Gallatin also represented the U.S. abroad, was president of the National Bank, and founder of New York University. In Geneva, a plaque marks the house at 7 rue des Granges, in the Old Town, where Gallatin was born.

The next major link was forged after the Civil War when the U.S., angered by the devastation of Union vessels by British warships (notably the Alabama) that had been obtained by the Confederates, instigated an arbitration process to resolve its ‘’Alabama Claims’’. This was successfully carried out in 1872, in a room in Geneva’s Town Hall now known as the ‘’Alabama Room’’. The settlement had the U.S. winning both an apology and a considerable sum in damages from Britain.

If that marked the beginning of Geneva as a place for international arbitration, it was (Calvin aside) arguably U.S. President Woodrow Wilson (1856-1924) who was Geneva’s biggest life changer in the sense of making the city the international hub it has become.

The Role of President Woodrow Wilson

Olivier Coutau, the canton of Geneva’s ‘’delegate to International Geneva’’, stated at a recent launch reception for Connections: ‘’If, 92 years ago, President Wilson had not pushed to obtain the seat of the League of Nations in Geneva, our canton would not be the same today.’’

After World War I (1914-1918), Wilson, who actually never travelled to the Swiss city, believed that further wars could be prevented if an international league of nations came into being. Just why Wilson was so determined to see the entity in Geneva, no one knows. Connections suggests that it was because: he often mentioned the Geneva-based Red Cross; he felt that Switzerland’s multilingualism made it ‘’a miniature model of the world’’; and finally because of Swiss neutrality—Switzerland was not a country that had participated in the war.

And so the League of Nations was born in 1920 and took up residency in an old Geneva hotel that is now known as the Palais Wilson—and today houses the Office of the High Commissioner for Human Rights, next door to five-star Hotel Président Wilson on Quai Wilson. In 1936, the League moved into what is now the United Nations Office at Geneva; it was integrated into the UN in 1946.

As Ambassador Betty E. King, U.S. Permanent Representative to the United Nations and Other International Organizations in Geneva, said at the launch reception for Connections, ‘’the importance which the United States gives to the work done in Geneva is reflected in the scale of our diplomatic presence. We have four U.S. Ambassadors in Geneva, more than in any other overseas diplomatic post.’’ (Besides Ambassador King, these are U.S. Permanent Representatives to the World Trade Organization, the Conference on Disarmament, and the Human Rights Council. There is a fifth U.S. representative – the Ambassador to Switzerland and Liechtenstein, located at the U.S. Embassy in the Swiss capital, Bern.)

There are plenty of interesting facts, anecdotes and tidbits in Connections, e.g. that Geneva’s most widely read daily newspaper, the Tribune de Genève, was started in the late 1870s by an American, or that U. S. President Ulysses S. Grant laid the cornerstone of Geneva’s American Church in 1877.

Precisely because it is useful, highly informative, and well-done overall, a few glaring typos but more saliently factual errors in the booklet stand out all the more. Example: the population of Geneva City is given as 500,000. Actually the city’s population is some 192,000; the entire canton (state) of Geneva has a population of around 458,000.

Another eye-stopper may just be a reader misunderstanding due to lack of contextual clarity. It is this: ‘’Already in 1778, Swiss officials proposed an alliance between the two countries [i.e. the U.S. and Switzerland]’’—the implication apparently being that this is all part of the history of Geneva‘s ties with the U.S. However, Geneva was not a part of Switzerland at the time; it only came on board in 1815.

In the overall scheme, these are minor glitches. The attractively illustrated, 48-page soft-back, authored by American academic Daniel Warner and Swiss ambassador Benedict von Tscharner, is well worth a read. Connections is not a commercial publication; for as long as the print run lasts, it will be available free at the U.S. Mission.