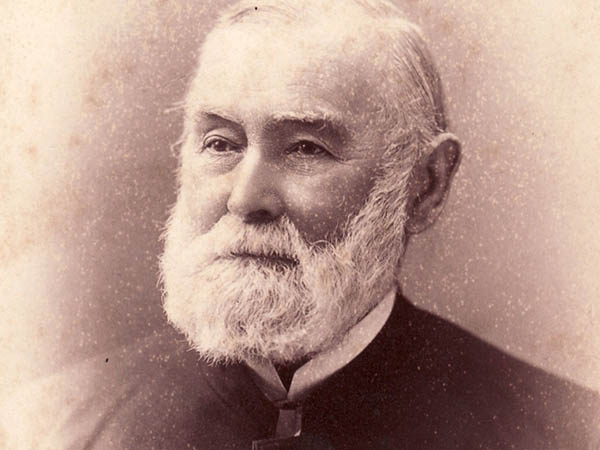 Harrison is probably best remembered as the candidate who won in the first round with Grover Cleveland only to be defeated by him in the rematch four years later.

Benjamin Harrison’s background was that of a political dynasty: his great-grandfather had been a signer of the Declaration of Independence, and his father had been a United States Congressman.

Harrison grew up in a relatively comfortable lifestyle in North Bend, Ohio. His education was a tutored one. He would attend a prep school in Cincinnati before enrolling at Miami (Ohio) University. He graduated near the top of his class in 1852, married in 1853, and passed the Ohio bar in 1854.

In 1854 he and his bride moved to Indianapolis, Indiana where he practiced law until 1860.

In 1857 he entered into the political arena and won election as the city attorney for Indianapolis. Following that, he became secretary of the Republican State Central Committee.

In 1862, Harrison entered the military by joining the Seventieth Indiana Infantry Regiment at the rank of second lieutenant. Harrison did not remember his military career fondly but rose through the ranks to leave the service as a brigadier general after having under General William Tecumseh Sherman and being among the first on the scene after the Siege of Atlanta.

After the war, Harrison returned to his private law practice and politics. In 1872 he his his bid to secure the Republican nomination for Governor of Indiana. In 1876, after securing the nomination he lost in the general election.

He was chosen to lead the Indiana delegation at the 1880 Republican National Convention held in Chicago the frontrunners which included Ulysses S. Grant, seeking an unprecedented but nonconsecutive term in office, Senator James Blaine of Maine, and Secretary of the Treasury were in a deadlock.

After the thirty-fifth ballot support shifted to the “dark horse” James A. Garfield whom Harrison supported in the election.

From 1881 to 1887 Harrison served in the United States Senate. While in the Senate he supported many of the same issues which would be discussed during his Presidency including: statehood for the Dakota Territory, conservation, protective tariffs, and Civil War pensions.

Campaign and Election of 1888

In 1884, the Republicans bypassed President Chester Alan Arthur who had succeeded to the Presidency upon the death of President James A. Garfield. In the hotly contested race of 1884 the Republican standard-bearer James Blaine lost by a razor thin margin to President Grover Cleveland. It was expected that the 1888 election would be a rematch between Cleveland and Blaine.

As happened quite frequently in the last half of the 19th century, nominating conventions did not necessarily go as expected. Blaine could not capture the nomination for himself. The convention became deadlocked between the front-runners when after eight ballots Blaine threw his support to Harrison, the unlikely candidate.

In the general election, it was pro-business Harrison against the President in favor of lowering tariffs, Cleveland. In an election not quite as close as 1884, Cleveland won by more than 90,000 in the popular vote but lost the electoral vote to Harrison, who became President.

A number of issues dominated the four years in which Benjamin Harrison was President.

The predictor however for the what would happen in the General Election of 1892, was the midterm election results of 1890. The raising of taxes via the McKinley Act had a great impact on the American consumer. That combined with the legislation with respect to spending including the Civil War pension appropriation in the first year of his administration also found disfavor with the voters.

The Campaign and Election of 1892

In 1892, the current President Benjamin Harrison lost to the former President Grover Cleveland. For the first time in the nation’s history, the two presidential candidates had both been President. Cleveland’s victory returned a President who had been defeated to a second term, an event which has never been repeated.